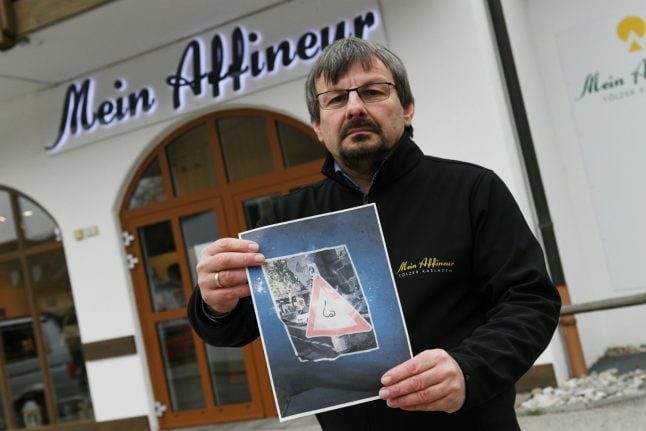 Wolfgang Hofmann, boss of Tölzer Kasladen, stands with a photo of the protest signs in front of his shop. Photo: DPA

A Munich court ruled on Tuesday that Manuela Kragler, who lives on top of the Tölzer Kasladen shop in Bad Heilbrunn, can no longer display signs depicting a nose and a warning sign.

But a court spokeswoman, quoted by national news agency DPA, said the unhappy neighbour could still voice her opposition that “there is an odour that is a nuisance and that she finds it stinks” because it was “an expression of opinion”.

The feud has been going on ever since the shop moved into the premises in 2016 and, in a separate legal case, shop owner Wolfgang Hofmann is trying to argue that he should be allowed to mature cheese there.

Neighbours have said the shop, which stocks around 200 types of cheese and supplies high-end restaurants, is maturing up to three tons of cheese on the premises. The Bad Heilbrunn municipality, which has a total population of around 4,000 people, is in Germany's southern Bavaria region which is famous for its dairy produce.

But the shop's arrival got up Kragler's nose and she complains that the smells drift up through open windows, staircases and even electric sockets.

The owner Hofmann “denied there was a smell problem right from the start… The dispute has escalated more and more,” Kragler was quoted by Süddeutsche daily as saying.

Hofmann has said the smell is in fact emanating from nearby farming activity rather than his shop and has accused his neighbours of hiding some old cheese behind a fuse box to pin the blame on him.

“It is logical that it smells like cheese in the cheese shop itself,” he was quoted as saying.

A solution to the problem may be on the horizon, as Hofmann added that he was seeking new premises.