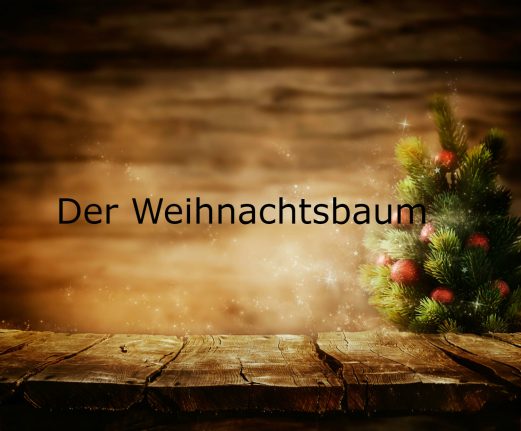 “Der Weihnachtsbaum” is the German word for Christmas tree.

But it is equally often referred to as “Der Tannenbaum” which simply means fir tree but in December always refers to the Christmas tree.

Sometimes it is also called “Der Christbaum” (Christ tree) in regions such as Lichtenstein. A young boy unpacking presents under the Christmas tree in Bavaria, Photo: DPA

What is the history behind it?

Christmas trees date back to the ancient Romans, and this use has been practiced worldwide, because people believe evergreen trees symbolize life, fertility and health.

Due to this belief, fir trees were often placed in homes during the winter time in order to strengthen one’s health.

This custom is commonly attributed to the Germanic Pagan culture.

In northerly regions people would often place fir branches in front of their homes to prevent evil spirits from entering them, and preserve hope for the early arrival of spring.

Here and there, certain people would decorate their trees, such as people from the Guild chronicle of the municipal handicraft in Bremen (1597), and for example the Duchess Dorothea Sibylle of Silesia (1611).

Later in the 18th century, it was common for wealthy people to purchase a tree, as only they could afford one.

And only since the 19th century did this usage become popular among all citizens.

People began to desire decorating a tree for their Christmas.

Nowadays, most people cannot imagine the holidays without a Christmas tree.

What role does “der Weihnachtsbaum” play in Germany?

In Germany the Christmas tree is the symbol of Christmas due to its almost angelic decorations and lovely smell called “Tannenduft” (fir scent).

This year around 25 million trees will be put up for Christmas ( this means around ninety percent of Germany is accustomed to the Christmas tree tradition).

The first is the star (to Bethlehem) which is placed on the top of the tree.

Secondly, “die Christbaumkugeln” (baubles), or simply “Kugeln” (balls/spheres), are hung from top to bottom and all around the tree. Usually, they are shiny, and sometimes matte.

The colours vary depending on the decorator. Red, gold and silver still remain the classic colors but often you will find purple, green and blue ones as well.

The next component is “die Christbaumkerzen” (Christmas tree lights/candles).

Many families decorate their trees with actual candles, but many also use “Lichterketten” (light chains).

The last component is the “Lametta” (tinsel), which covers the tree from top to bottom. It comes in many colors such as red and gold, but the classic color is silver.

But of course, every family has their own traditions. Some not only hang “Christbaumkugel” but also other ornaments such as Santa Claus figurines or glass doves.

In Germany, like many other places, the presents are set under the tree and the “Bescherung”, when everyone exchanges gifts, takes place there.

Most families only put up their tree and decorate it shortly before Christmas Day.

And usually, the trees get tossed out (on the streets) approximately two weeks after the 24th, so that it will still be standing on Silvester.

Once again you decorated the Christmas tree beautifully.

Aren’t you worried that the tree will catch fire due to the candles? Nope. Luckily, that has never happened to us before.