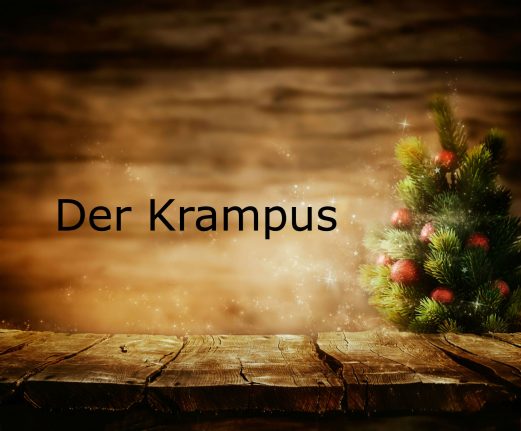 Two Krampuses pose for a photograph at the Krampuslauf in Munich. Photo: DPA.

The Krampus is a horned, half-demon figure who is spotted during the Christmas season in Central European folklore. There are many variations across Europe on the figure’s appearance and behavior.

He is especially popular in southern Germany and in the Alpine regions. In these areas the Krampus accompany St. Nicholas and his companion Knecht Ruprecht, whom you can learn more about tomorrow by reading our Advent word of the day.

Der Krampus is the opposite of St. Nicholas, who is the patron saint of children in Catholicism. Rather than rewarding the good children for their behavior throughout the year like St. Nicholas, folklore says that Krampus punishes the bad children, often taking them to his layer in the mountains.

There are several theories about the origin of the Krampus figure, and it is likely that the legend is based on early mythology. The figure bears similarities to creatures in both Norse and Greek mythology. He is typically represented as a half-goat, half-demonic beast with a lolling tongue and fangs. One of the Krampus groups prepares to begin their run through Munich's Marienplatz. Photo: DPA.

Traditionally on the eve of St. Nicholas Day, young men dress up in elaborate (and often very weighty and expensive) Krampus costumes and run through Munich’s Marienplatz Christmas market, as well as to homes and businesses.

This event constitutes the Krampuslauf, or Krampus run, and takes place this year on December 8th, with an expected 25 different guest Krampus groups. Even the Krampuses get tired! Young men take a rest from their weighty costumes. Photo: DPA.

I’m always afraid of the Krampus run in Munich.

The night of the Krampuses is a beloved alpine Christmas tradition.

This year the city of Munich expects 25 guest Krampus groups. That is so many Krampuses!