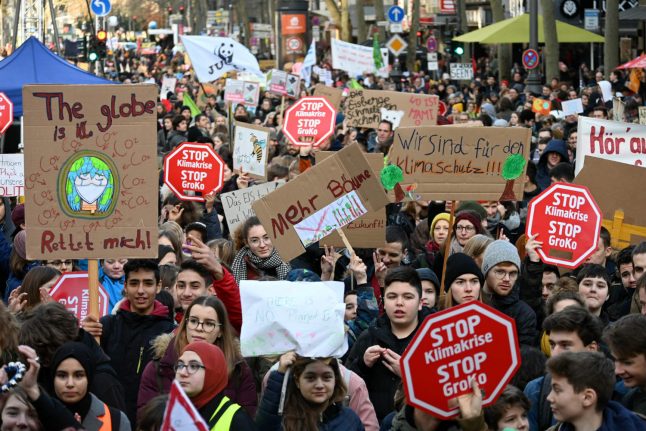 It came as Germany's upper house of parliament, the Bundesrat, voted to block part of the German government's new climate package.

Carrying signs that read “One planet, one fight” and “The sea is rising, so must we”, thousands flocked to Berlin's Brandenburg Gate for the latest “Fridays for Future” protest inspired by 16-year-old campaigner Greta Thunberg.

Some 30,000 mainly young people also gathered in Hamburg and another 17,000 in Munich to voice alarm at rising temperatures, police said.

The marches are happening three days before the start of the UN climate conference in Madrid. Across the world, people in 2,400 cities in 157 countries were set to protest against climate change in a bid to get governments to take more action.

In Germany, the Fridays for Future movement expected 100,000 campaigners to take part.

Demos got underway around lunchtime. People wrapped up warm against the cool temperatures and carried signs, like these demonstrators in Freiburg and Bremen.

As campaigners were making their voice heard, the Bundesrat was voting on new government measures aimed at cutting greenhouse gas emissions.

In the vote, the Bundesrat, which represents the country's 16 states, blocked parts of the government's climate package.

Members voted for the majority of measures to pass, but urged a renegotiation of some parts related to taxes and subsidies.

The package, approved by the Bundestag earlier this month, has been slammed by environmental groups for not going far enough.

The draft legislation among other things lays out a rise in fossil fuel prices and a tax reduction on rail tickets in an effort to encourage people to ditch their cars and avoid flying.

Meanwhile, the European Parliament on Thursday voted to declare an EU-wide climate emergency, calling for emissions to be cut by 55 percent by 2030, and for the EU to become climate neutral by 2050.

However, Fridays for Future in Germany said the action wasn't enough.

They wrote on Twitter that “the fact the EU is declaring a climate emergency without acting is like the fire brigade screaming 'There's a fire!'”

What are demonstrators calling for?

Fridays for Future, led by 16-year-old Swedish climate activist Greta Thunberg, is calling for governments to commit to reducing CO2 emissions to stave off the worst impacts of climate change.

The students argue that governments are not on track to meet their commitments under the 2015 Paris Agreement, which aimed to keep global warming below 2C, let alone the more ambitious 1.5C threshold. Germany has admitted that it will miss its 2020 climate goals.

In Germany, protesters are also demanding a rapid exit from coal mining. They say government proposals to phase out coal by 2038 are too late.

Friday's large-scale protest follows other in March, May and September.

Spokesperson for the Germany movement, Luisa Neubauer said there had been massive “political failure” when it came to tackling climate change.

A new report by the German government published this week showed that the consequences of global warming are becoming more noticeable in Germany.