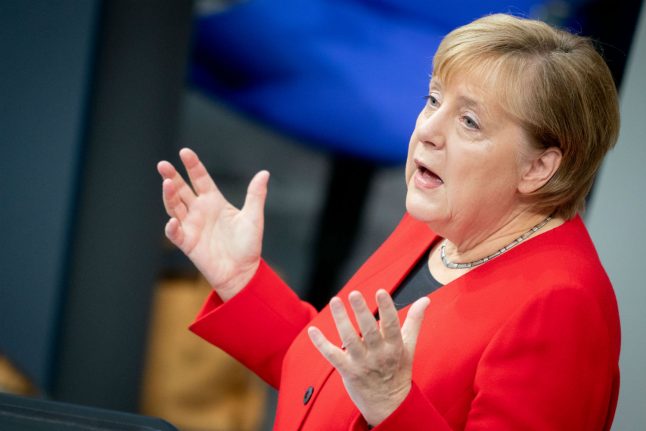 Merkel speaking at a Bundestag general debate in Berlin on Wednesday. Photo: DPA

Days before leaders of the transatlantic alliance are due to hold a summit,Merkel said NATO has been a “bulwark for peace and freedom” over the past 70 years.

“The preservation of NATO is in our own interest, more than during the Cold War,” Merkel told parliament.

READ ALSO: Germany plans to up defence spending to over €50 billion

The German chancellor's strong defence of the bloc came after Macron said it was suffering from “brain death”.

In his interview with The Economist earlier in November, Macron blindsided his allies as he decried a lack of coordination between Europe and the US. He also lamented recent unilateral action in Syria by Turkey, a key member of the alliance.

Merkel had reacted then with uncharacteristic gusto, slapping down what she described as unnecessary “sweeping judgements”.

While not referring directly to Macron's remarks in her speech to German parliament, Merkel addressed the French leader's critique.

Turkey was a “difficult partner” in NATO, she acknowledged, but also noted that being a partner meant being able to air differences of opinion.

“I say that Turkey should stay a NATO member… because it is of strategic importance for the alliance that Turkey is part of it.”

The storm over the transatlantic partnership comes as it celebrates seven decades since its founding.

At last year's NATO summit in Brussels, the US leader even publicly berated Merkel for failing to do enough on the issue.

For her part, the German leader has not shied away from addressing growing
differences with Germany's erstwhile US mentor under a mercurial Trump.

Underlining Washington's changing role in playing world cop, Merkel noted that “the United States no longer automatically takes up responsibility when it's burning around us”.

It was therefore crucial to maintain the defence alliance, stressed Merkel.

To this end, Merkel pledged to keep raising Germany's defence spending, with an aim of reaching the goal of committing 2.0 percent of economic output by the early 2030s.

In a sign that Merkel's gesture may go some way towards heading off direct conflict with Trump, Robert O'Brien, national security counsellor to the US president, welcomed the pledge in an interview with Bild daily.

At the same time, he said Germany also needed to step up in global defence.

“It would be great if Germany took up its role as one of the leaders of the world,” he said.

As a leading economic power, “Germany has a duty to invest appropriately in defence for the benefit of its own defence and the defence of its alliance partners.”