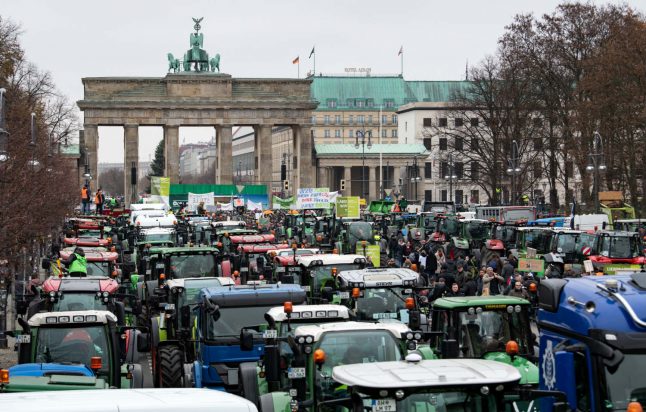 A long line of tractors in Berlin at the Brandenburg Gate on Tuesday. Photo: DPA

The rally, being held in protest to government plans which farmers say are threatening their livelihoods, is having a major impact on traffic in the capital. Several roads and the Autobahn have been hit by huge traffic jams due to the overload of tractors.

Long convoys brought traffic to a standstill in the heart of the city's government district, in the biggest display yet of farmers' anger over agricultural policy changes agreed by Chancellor Angela Merkel's cabinet in September.

More than 5,000 tractors as well as 10,000 farmers, made their way from across Germany to the Straße des 17. June, at the city's famous Brandenburg Gate in the centre of Berlin, for Tuesday's rally.

Organisers said as many as 8,500 tractors took part.

“First the plants starve, then the farmers, then you,” read one sign attached to a green tractor.

“Do you know who feeds you?” read another.

Farmers bring farmers on Bornholmer Straße. Around 10,000 expected in Berlin today to protest against environmental protection measures. What big tractors they have!! #Bauernprotest #Bauerndemo ? pic.twitter.com/OcpCO1MO3b

The government's policy package includes plans to limit the use of fertiliser to tackle nitrate pollution in groundwater, and phase out the controversial weedkiller glyphosate by 2023 to protect insect populations.

Furious farmers say the environmental protection measures go too far and pose an existential risk to their farms.

Many are also fed up with the “farmer bashing” they say has cast them as villains in the fight against climate change.

Residents in the capital were urged to leave their cars at home. There was also disruption to bus and tram lines.

Convoys, some up to 20 kilometres long, were seen early in the morning travelling along roads.

The German Gilets Jaunes? Farmers heading to Berlin in more than 5000 tractors in the early morning today to protest against government's agricultural policies.According to leading activists the movement is organised via social media +connects about 100.000 followers #Bauerndemo pic.twitter.com/0bOqNArOXr

On Tuesday morning the exits at Tempelhofer Damm, Kaiserdamm and Beusselstraße on the southern city Autobahn were closed. In addition, the Victory Column and the Straße des 17. Juni between Brandenburger Tor and Ernst-Reuter-Platz have been shut. Parts of Kaiserdamm and Bismarckstraße were also closed to regular traffic.

Drivers were facing 50 minute delays on Heerstraße, where traffic was also congested due to the rally.

Probably best not to drive in Berlin today #Bauerndemo pic.twitter.com/g0AnJgKUy2

Brandenburg police said a total of 5,095 tractors are involved in the protest.

The first farmers arrived with their vehicles at Brandenburg Gate in the early hours of Tuesday.

Another 1,825 tractors followed early Tuesday morning from Brandenburg.  In Perleberg alone, according to the police, almost 550 farmers spent the night with their tractors at a meeting point. “There are 1,000 vehicles on the route from Perleberg to Nauen, which we are leading to Berlin,” a police spokesman said in the morning.

Police recorded two accidents caused by drivers overtaking. They urged people to be careful on the roads.

The demo is the latest in a series of protests by farmers in Germany. They are being organized by the movement Land schafft Verbindung (countryside creates connection) as well as the German Farmers' Association and the alliance Forum Natur. Farmers in their tractors in Berlin on Tuesday. Photo: DPA

Berlin police were expecting severe traffic problems throughout Tuesday, especially in the districts of Mitte and Charlottenburg-Wilmersdorf.

In a tweet they said there would be “significant traffic disruption”.

The Straße des 17. Juni was completely closed from 6am, Altonaer Straße from 9am onwards.

Bismarckstraße – Kaiserdamm and Hofjägerallee – Klingelhöferstraße streets were closed off, according to the Berlin Traffic Information Centre (VIZ). No regular traffic, no delivery traffic and no taxis are permitted.

Additionally, the exits Beusselstraße (direction Wedding), Kaiserdamm-Süd (direction Neukölln) and Tempelhofer Damm (both directions) was to be closed on the city Autobahn A100 between 9am and 9pm There was also set to be considerable restrictions on local public transport, especially to bus and tram services.

Traffic jams were also expected in Brandenburg and drivers are urged to check for updates.

Other German cities have seen similar demos in recent weeks, including  large one in Bonn last month.

Farmers have also taken to the streets in France and the Netherlands with similar complaints.

Germany's agriculture minister Klöckner defended the government's measures, aimed in part at bringing the country in line with EU regulations, but said she understood the farmers' frustrations. “Consumers keep expecting farmers to do more, but are increasingly less willing to pay more for it,” she told ARD broadcaster, calling for more appreciation for the industry.

Klöckner was due to address the rally later on Tuesday, where farmers plan to hand her a large envelope containing letters expressing their grievances.

Merkel has invited some 40 agricultural organisations to the chancellery for talks on December 2nd.