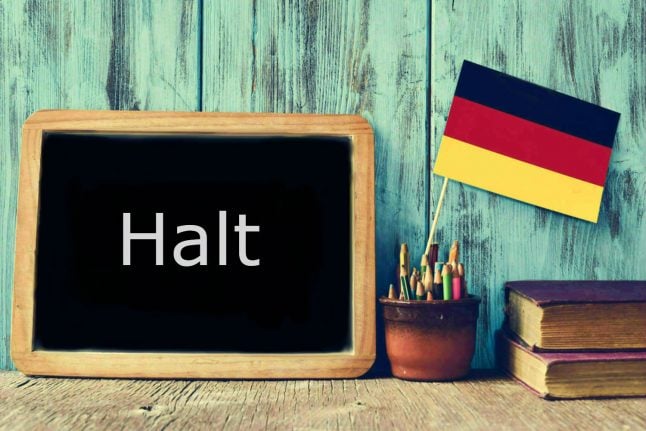 Welcome to another word of the day, which might sound confusing at first, but trust me, it’s not as hard as it may seem. The possibility of hearing a German speaker say halt in any context is very high, so let me start off by giving examples for how it may be used.

First up, you might hear a German speaker scream “Halt!” That simply means “Stop!” and is not what we’re looking at today (but still a useful word to know.)

The second option is Der Halt, as in festhalten. Festhalten means “to hold on”, so Halt in this connection means “grip.” Also good to know, but not what we are looking for today.

So last but not least (and also the way of saying it that we’re going to be looking at) is when halt is used in a sentence, such as: “Das ist halt so.” In this case, halt is an exclamation that gives an emphasis to a request or an advice.

According to the Duden, this halt has its origin in the Mid High German word halt, which means “more” or “rather.” Connected to this, possible translations for halt are “just” or “simply.”

In German, halt is usually used to give more emphasis to what you’re saying. This way, the sentence “Das ist halt so” (“That’s just the way it is”) sounds a bit more drastic than if you just said “Das ist so.” (“That’s the way it is.”)

Halt is quite common to say in the southern parts of Germany, as well as in Austria or Switzerland, although it has made its way to the northern regions of Germany as well. Actually, especially with younger folk, it’s highly possible that you hear them say halt multiple times in a single sentence – it just gives it more expression. “Das ist halt so,” says this woman, emphasizing that she can't change a situation. It's just the way things are. Photo: depositphotos/studiograndoest.

So I just told her that she should simply get in touch.

I am simply in a bad mood.