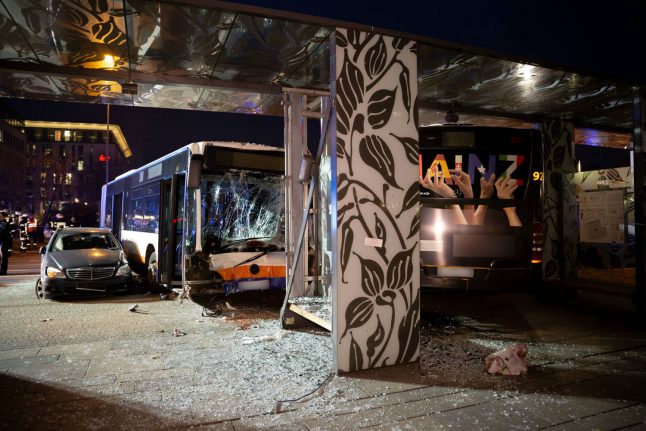 The damaged bus following the accident in Wiesbaden in Hesse. Photo: DPA

According to police, the man died in hospital on Friday after being hit by the public bus in the Hessian capital on Thursday evening.

A total of 23 people were injured in the accident, three of them seriously.

The 65-year-old driver of the bus lost control of his vehicle and collided with several vehicles. However, the cause of the incident is not yet known.

“It could have been a technical defect or human error. We can't say that yet,” said a police spokeswoman on Friday morning.

According to initial findings, the driver had stopped in front of Wiesbaden’s main station (Hauptbahnhof) to allow passengers to board and alight, but then entered into oncoming traffic.

The driver collided with three oncoming cars. The drivers of those cars suffered minor injuries. The bus then drove across a grassy area and collided with three more oncoming cars. Two drivers were slightly injured and one was seriously injured.

Afterwards, according to police reports, the bus collided with the rear end of a parked bus, whose driver suffered serious injuries. Nine passengers were also slightly injured.

Finally, the 65-year-old bus driver hit two people with his vehicle at the bus stop, including the 85-year-old man who died later. The second passer-by suffered minor injuries.

According to the police spokeswoman, the bus driver himself was seriously injured, and five of his passengers suffered slight injuries.

A large-scale closure of the scene of the accident lasted until late into the night, causing considerable traffic disruption.

The rescue service and fire brigade were on site with a total of almost 30 vehicles and over 80 emergency staff.

Because the investigations are to be continued on Friday, police expect further delays. The damaged cars and buses were towed away.