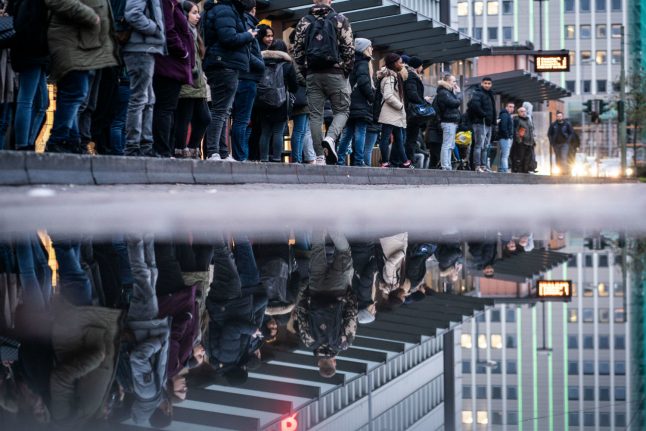 Lots of passengers wait for buses in Frankfurt on Tuesday during the first day of the strike. Photo: DPA

Drivers in around 25 cities in the central state of Hesse, including Frankfurt, Hanau, Fulda and Offenbach, have been taking part in the action, Verdi negotiator Jochen Koppel said. In Frankfurt, 56 of 64 bus lines were hit by cancellations on Tuesday when the action began.

On Wednesday it was a similar picture, reported German broadcaster Hessenschau.

The dispute between private bus companies in Hesse and Verdi is over pay and conditions. The Rhein-Main-Verkehrsverbund (RMV), which operates the region's public transport network, is not involved in the row. However, it is publishing updates on the strike and the lines affected.

On the RMV website, a statement said the strike would last an “indefinite period”. The union Verdi has also not said when the strike will end.

Verdi confirmed on Wednesday morning that buses were at a standstill in many locations, including Gießen and Darmstadt.

Meanwhile, in Frankfurt, passengers also had to deal with possible cancellations and delays on underground trains and trams due to staff meetings involving transport operator VGF.

There was also expected to be some disruption on the rail network. In Hanau, Hesse, an employee puts a sign up on a bus. Photo: DPA

A total of about 3,000 drivers are expected to join the strike over the course of the day. According to the union, about 3,100 drivers had downed their tools in the first day of action on Tuesday. “We had a very strong start,” said a spokeswoman.

Verdi wants to see wage increases as well as more paid breaks and holidays for the 4,400 drivers of private bus companies in the region.

However, the collective bargaining conflict seems to be deadlocked.

The regional association of bus and coach operators in Hesse (LHO) called on the union to return to the negotiating table. The LHO had offered to increase the basic wage to €15.60 per hour over the next four years. The fifth round of negotiations last Thursday was unsuccessful.

Managing director of the association, Volker Tuchan, said on Tuesday: “Our offer from Thursday is on the table.”