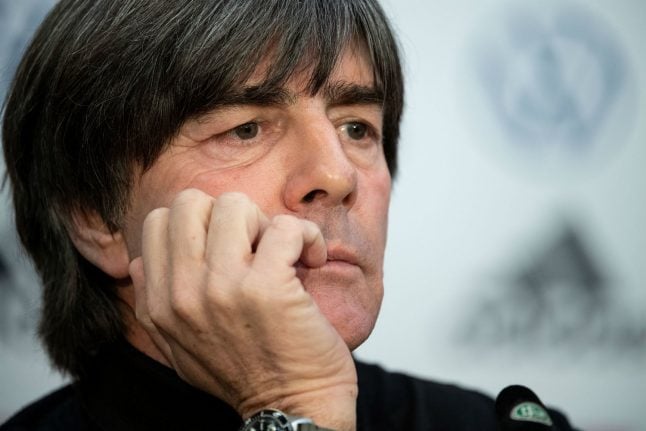 “I don’t think we’re among the top favourites,” said Löw ahead of Saturday’s Group C qualifier, citing world champions France, England, the Netherlands or Spain as potential winners next summer.

“A lot is possible, this team has great qualities, but many players still need a few more years to develop.”

Germany, who are second in Group C, will book their Euros place in Mönchengladbach if they better Northern Ireland’s result in their match against group leaders the Netherlands.

The Germans are level on points with the Dutch with the top two teams going
through, and Löw is eager to wrap up qualification before Tuesday’s final qualifier against Northern Ireland, who are three points back in third.

“We’re two steps from the Euro 2020 finals, we want to win the last two games and have a positive end to the year,” said Löw.

‘A work in progress’

However Löw says his young Germany team is still a “work in progress” in the wake of last year’s World Cup debacle in Russia.

His side were humbled 4-2 at home in September by the Dutch, before throwing away a two-goal lead against a weak Argentina in last month’s 2-2 friendly draw in Dortmund.

After Germany failed to qualify from their group at the 2018 World Cup
finals, the 59-year-old cleaned out his squad in March by informing Thomas
Mueller, Mats Hummels and Jerome Boateng their international careers were over.

“I have the feeling that ‘Matze’ (Ginter) is a bit undervalued, but I know how reliable he is and how well he can perform,” added Löw.

However with Ginter’s fellow centre back Suele set to miss most of the season, Löw has refused to recall Boateng or Hummels, his key defenders when Germany won the 2014 World Cup.

“The main thing is that he (Suele) returns fit, no one knows when he will be back on the pitch next,” added Löw.

Löw has said Neuer will start against Belarus on Saturday while Ter Stegenwill face the Northern Irish three days later.