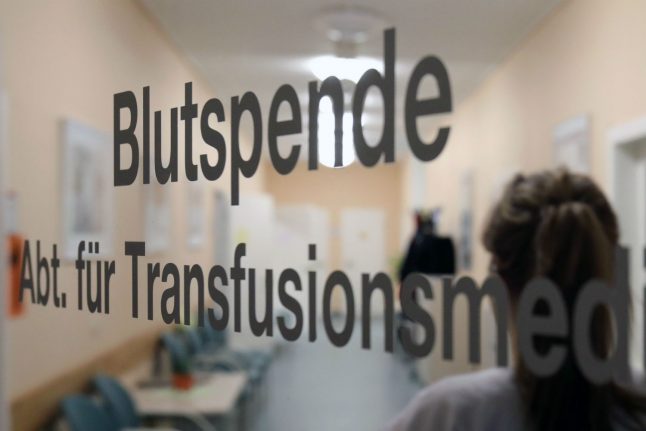 The window of a blood donation office in Rostock. Photo:

A blanket exclusion of gays and transgender people represents discrimination without medical necessity – and aggravates Germany’s shortage of life-saving blood donations – according to the proposal acquired by Spiegel Online.

Until now, people with so-called “sexual risk behaviour” have only been allowed to donate blood under certain conditions – namely if they have not had sex for a year.

Before the change, individuals with so-called “sexual risk behaviour” were excluded from blood donation for life under the rationale that they were at greater risk of contracting HIV or hepatitis C than the general population.

The new guidelines allowed the group, which included men who have sex with men and transsexuals, to donate blood 12 months after stopping sexual activity.

READ ALSO: Why Germany needs to get its message right on LGBT rights: report

According to the new directive, male and female prostitutes and heterosexual people with frequently changing sex partners are also affected.

“The adjustment in the guidelines to a waiting period of twelve months since the last sexual intercourse for blood donation is an assumption out of touch with everyday life,” claimed the FDP motion.

It was introduced by the delegates Jens Brandenburg and Katja Suding and was supported by the FDP parliamentary group.

'Not a decisive factor'

“The sexual or gender identity of a person is not a decisive factor for an infection risk, it's the actual risk behaviour which is – for example by unprotected sexual intercourse with frequently changing partners,” the motion stated.

Both prostitution and changing sexual partners would in any case be queried separately in a lifestyle survey each person is required to fill out before donating blood.

According the FDP proposal, an explicit designation of homosexual and transgender people as a risk group is an unjustified and discriminatory generalization.

“The groups of people as a whole are being accused of unreflected and risky sexual behaviour,” the FDP deputies wrote.

They acknowledged that the safety of donated blood is the highest priority. But “we can not afford to exclude people who are willing to donate from blood donations on the grounds of their gender or sexual identity,” Katja Suding, the deputy leader of the federal parliamentary group, told Spiegel Online.

“Instead, the best test methods medicine has already made available must be used. That is our ethical duty.”

In Germany, about 14,000 blood donations are needed per day. According to the Red Cross, around 80 percent of German citizens need a blood donation once in their lifetime.

The demand for life-saving blood donations is very high, but ensuring supply is becoming an ever greater challenge, according to the FDP proposal.

“There's a shortage of blood in hospitals. Lives are at stake,” Suding said. Only two to three percent of Germans donate blood regularly.

Due to demographic change, the number of blood donors will continue to decline. Regulations mean that repeat blood donors must be under 68 years old. At the same time, demand is rising due to the growing proportion of the older population.

In 2015, the European Court of Justice (ECJ) declared general bans on blood donation inadmissible as long as the health protection of blood donors is guaranteed.