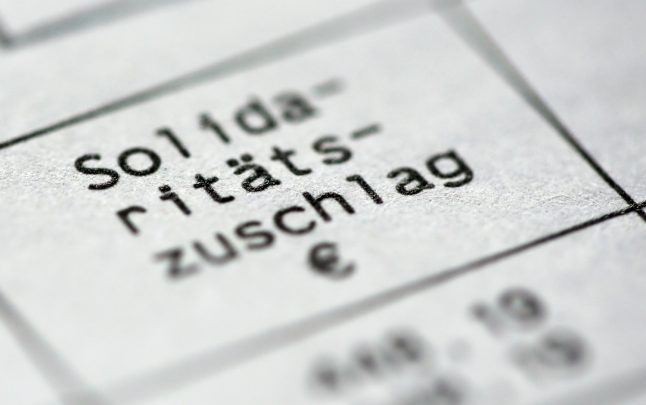 The Bundestag agreed on Thursday to get rid of the surcharge (Solidaritaetszuschlag) – so-called 'solidarity tax' – almost completely. The charge will now be abolished for 90% of taxpayers from 2021.

Under new rules, 6.5 percent of taxpayers will pay a reduced rate while 3.5 percent of the wealthiest Germans will continue to pay it at its full rate.

The massive reduction is possible because German reunification has made great progress, Finance Minister Olaf Scholz said in Berlin on Thursday.

On Thursday, 369 members of the conservative CDU/CSU and the centre-left Social Democrats (SPD), which both make up the 'grand coalition,' voted in favour of the bill, while the opposition voted unanimously against it.

READ ALSO: From climate action to 'Soli tax' reform: What you need to know about Germany's planned changes

The payment, which brought the state €18.9 billion in 2018, was first launched in 1991. It was introduced to help cover the costs of reunification and invest in infrastructure in former East Germany. It was originally meant as a temporary measure but was made permanent in 1995.

A 'Solidary Pact' was then agreed in 2001 in a bid to financially support the eastern German states but that pact expires at the end of this year.

The charge, known as the “Soli,” levies an additional 5.5 percent income tax after a certain level of earnings.

It appears on the payslips belonging to taxpayers in Germany. Under the new rules, taxpayers could save anything from a few hundred euros to thousands per year.

According to the Finance Ministry, the state will receive about €10.9 billion less in the first year after it is partially abolished.