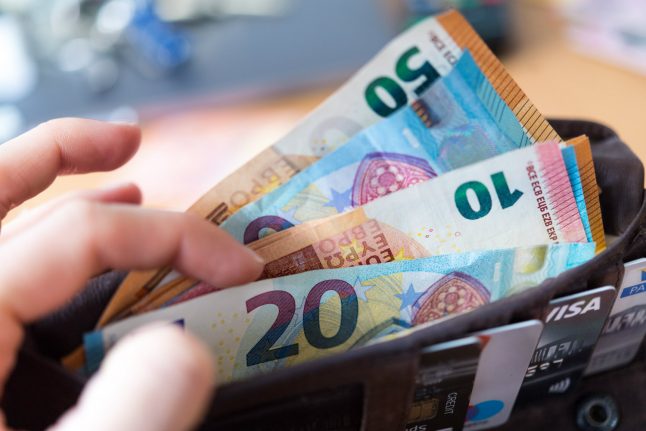 How much will you save? Photo: DPA

The so-called 'Solidarity tax' or 'Soli' charge is set to be abolished for 90 percent of taxpayers from 2021.

The massive reduction is only possible because of the progress made after German reunification nearly three decades ago, Finance Minister Olaf Scholz said in Berlin on Thursday.

What is it anyway?

The 'Soli' was introduced as a special 'tax' in 1991 mainly for infrastructure and projects in eastern Germany after German reunification in 1990.

The charge currently levies an additional 5.5 percent income tax or corporation tax after a certain level of earnings, and last year brought the state a total of €18.9 billion.

The deduction appears on taxpayers' payslips under Solidaritätszuschlag (solidarity surcharge).

Who will have to pay it in future (and who won't)?

Under the new rules approved by the German government, 6.5 percent of taxpayers will pay a reduced rate while 3.5 percent of the wealthiest Germans will continue to pay it at its full rate.

According to the Finance Ministry, the state will lose out on about €10.9 billion in the first year after it is partially abolished.

Here are some examples of how it will affect certain groups of people in Germany:

SINGLE PEOPLE: Single employees subject to social insurance contributions will no longer pay the Soli from 2021 if they do not earn more than €73,000 gross per year.

Up to an income of €109,000, only a portion of their income will be lost to the solidarity surcharge. And those who earn more will continue to pay as before.

FAMILIES WITHOUT CHILDREN: Here it depends on whether both partners earn, or only one. A married couple without children – where only one partner earns – is fully relieved of the Soli up to a gross wage of around €136,000 and partly relieved up to around €206,000. FAMILIES WITH CHILDREN: Here, too, it depends on whether both parents earn or not. For a family with a sole earner and two children, the lower limit is a gross annual wage of around €152,000.

SELF-EMPLOYED: According to the Finance Ministry, 88 percent of business people assessed for income tax are exempt from the Soli – that’s about 370,000 people, and includes, for example, self-employed craftsmen. A further 27,000 people no longer have to pay the full amount.

READ ALSO: From climate action to 'Soli tax' reform: What you need to know about Germany's planned changes

COMPANIES: Anyone who runs a GmbH company and pays corporation tax for it is exempt from the reform and will have to continue to pay the Soli.

SAVERS: Some people will still face charges. For example, if you earn more than €801 per year in interest from money stored in a savings account then you'll have to contribute to the Soli. This would usually only apply to older agreements – because nowadays interest rates are significantly lower.

HOW MUCH WILL YOU SAVE?

According to calculations by the Munich-based ifo Institute, a family that no longer has to pay the Soli at all could save more than €1500 a year, depending on their income. Even those who still have to pay a partial charge can save several hundred euros.

People who earn very little won’t make much savings because they currently do not pay a lot in Soli contributions, or they are already exempt.

WILL IT BE COMPLETELY ABOLISHED?

It’s not on the cards yet but some politicians are pushing for it. The conservative Christian Democrats (CDU/CSU) and the pro-business Free Democrats (FDP) want the Soli to be completely stamped out as early as January next year.