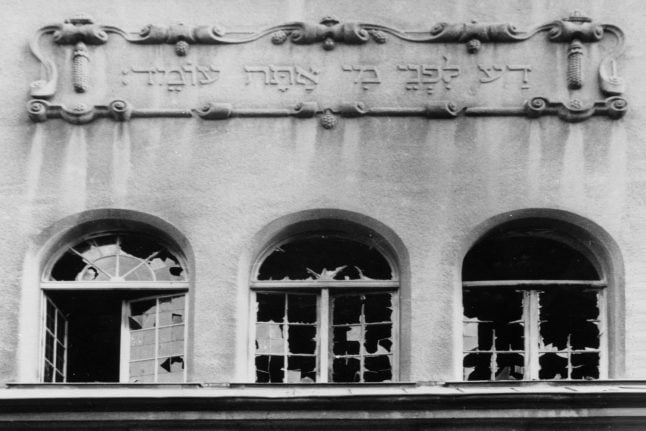 Kristallnacht, which is also known as Reichspogromnacht and Novemberpogrome, was a series of violent attacks on Jewish communities across Germany. It was perpetrated by the Sturmabteilung, or SA – the Nazi party’s original paramilitary force – as well as German civilians on the night of November 9th.

Although there had been much discrimination against the Jewish community prior to 1938, such as the boycott of Jewish shops in 1933 and the Nuremberg Laws of 1935, Kristallnacht is generally viewed as the beginning of the Holocaust.

Precise figures are hard to ascertain, but it is estimated that about 100 Jews were killed in the attacks, at least 1,000 synagogues were burned down, and approximately 8,000 Jewish businesses were destroyed. In the days that followed, some 30,000 Jewish men were arrested and sent to the concentration camps of Dachau, Buchenwald and Sachsenhausen.

The trigger for the violence

On the evening of November 9th, Hitler and several important Nazi figures were at a dinner celebrating the Beer Hall Putsch of 1923 when they received news from Paris that a Nazi diplomat, Ernst vom Rath, has been assassinated by a seventeen-year-old Jew named Herschel Grynszpan.

Grynszpan was living with his uncle in Paris, but his parents, who had been living in Hannover since 1911, had recently become victims of the Polenaktion: the forced expulsion of around 17,000 Polish Jews from Germany. Upon hearing the news, an angered and embittered Grynszpan went to the German embassy in Paris and shot vom Rath.

Following the dinner and a discussion between Hitler and Joseph Goebbels, the propaganda minister informed Nazi leadership that retaliations against the Jewish community would not be organized or prepared by the party. But, if they erupted spontaneously, they wouldn’t be stopped.

Telephone calls were made, police were commanded to arrest the victims rather than the perpetrators, and thus ensued the horrific violence.

Even though there had been violent attacks against Jewish communities before 1938, this date is key as it signaled a more intense, systematic approach by the Nazis to the so-called “Judenfrage”, or the “Jewish Question”.

The pogrom itself had caused massive damage, but it was of course the Jewish community which was forced to pay. It was fined one billion Reichsmarks as reparations, and a law was passed on November 12th which effectively banned Jews from most of the professions which they had still been entitled to.

Moreover, subsequent measures taken against the Jews worked to further alienate them from German society. They were forced to sit in separate train compartments and were excluded from German schools, for instance.

Such restrictions were in addition to the Nuremberg laws, also called the Reich Citizenship Law and the Law for the Protection of German Blood and German Honour, which had already effectively stripped Jews of their German citizenship.

Although the Final Solution, or the Endlösung, wasn’t officially decided until the Wannsee Conference in January 1942, many considered Kristallnacht as the first step into the Holocaust. One of the primary ways in which the attacks – and the Holocaust more broadly – are remembered is through Stolpersteine. Meaning ‘stumbling stones’, Stolpersteine are 10 cm by 10 cm concrete cubes covered in brass. Each Stolperstein has its own inscription remembering a victim of Nazi persecution.

Approximately 70,000 brass cubes have been laid since the project started in 1996. The cubes are cemented into the pavement where the individual last freely chose to live or work, before falling victim to Nazi persecution.

It’s also interesting to consider how November 9th is sometimes labelled as Germany’s Schicksalstag (day of fate), as it is the date on which a number of significant events in Germany’s history have taken place. Along with Kristallnacht, November 9th is also the date of the abdication of Kaiser Wilhem II (1918), the Beer Hall Putsch (1923) and the Fall of the Berlin Wall (1989).

The fall of the Berlin wall is the most recent of these events, yet the event is commemorated on October 3rd, the day of German reunification. This is not only a mark of respect for the victims of Nazi horrors, but also a sign of Germany’s ongoing debate about how to remember its traumatic history. 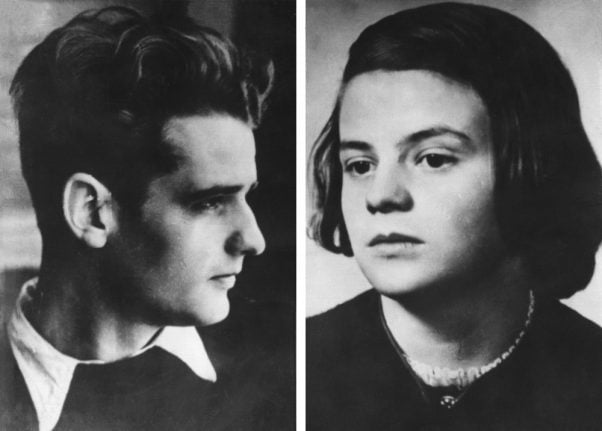 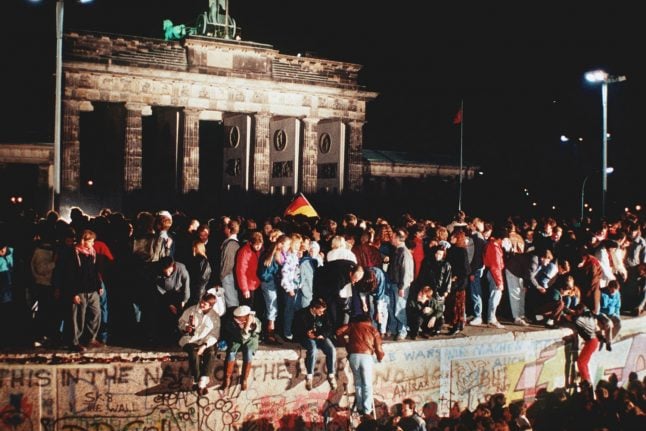 But the legacy of the young woman sentenced to a brutal death for distributing anti-Nazi pamphlets has recently been co-opted by Germany’s anti-lockdown movement, to the dismay of historians and the Jewish community.

At a demonstration in April, one woman had a placard featuring a picture of Sophie Scholl draped on string around her shoulders.

“The real damage is done by those millions who want to ‘survive.’ The honest men who just want to be left in peace,” it read — words famously pronounced by the resistance campaigner.

Even one of her nephews, Julian Aicher, has prominently spoken at corona skeptic demonstrations, including on a stage decorated with white roses — evoking the name of Scholl’s resistance group.

In a country where right-wing extremism is seen as the number one threat to security, and where a record number of xenophobic and anti-Semitic crimes were recorded in 2020, historians say the misappropriation of Scholl’s memory is deeply alarming.

Some also warn that democracy itself is being attacked at a time when living witnesses of World War II have dwindled significantly in numbers.

On February 22, 1943, Scholl and her older brother Hans, both members of a small resistance group called the White Rose, were beheaded in the Stadelheim prison in Bavaria following a summary trial.

They had been found guilty of distributing pamphlets on the grounds of Munich University, having converted to the resistance after being exposed to the horrors of the Third Reich as members of Nazi organisations in their teens.

Sophie Scholl, born on May 9, 1921, has become the most famous face of the resistance movement, with surviving photos showing her distinctive cropped hair and determined smile.

Hundreds of schools and streets now bear her name, and in 2003 she was named the nation’s fourth favourite German behind Konrad Adenauer, Martin Luther and Karl Marx.

The country’s political class also like to evoke the memory of the young biology student who stood up to the Nazis.

Annalena Baerbock, the Green party’s candidate to become Germany’s next chancellor after Angela Merkel retires in the autumn, has named Scholl as one of her “heroes”.

READ MORE: 75 years since the White Rose siblings were killed for resisting Hitler

Carola Rackete, the former captain of the Sea-Watch 3 migrant rescue ship, has said if Scholl were still alive, she would be part of the Antifa left-wing political movement.

But at the other end of the political spectrum, the far-right AfD also claimed in 2017 that Scholl would have given them her vote.

And now the resistance campaigner’s image has been hijacked by protesters against coronavirus restrictions in Germany, who have often sought to compare themselves with victims of the Nazis.

Some protesters have been seen wearing yellow stars similar to those Jews were forced to wear under the Nazis, carrying the words “not vaccinated”.

“I feel like Sophie Scholl, because I’ve been active in the resistance for months,” one protester told a rally against virus restrictions in Hanover in November, leading to widespread condemnation.

“Followers of conspiracy theories like to imagine themselves as victims, while demonising and delegitimising the democratic field,” Samuel Salzborn, the city of Berlin’s point man on anti-Semitism, told AFP.

According to Jens-Christian Wagner, a German historian who specialises in the Nazi era, the appropriation of Sophie Scholl by the anti-mask movement shows a loss of “historical awareness” among parts of the German population.

There are “almost no remaining witnesses” to the Nazi era, Wagner told AFP.

“They can no longer defend themselves when they are instrumentalised or when the far right rewrites history and the present by reversing guilt. It worries me,” he said.

Germany’s domestic intelligence agency has said it will monitor the “Querdenker” (Lateral Thinkers) movement, a particularly vocal anti-lockdown group, over concerns it poses a threat to democracy and has ties to right-wing extremism. 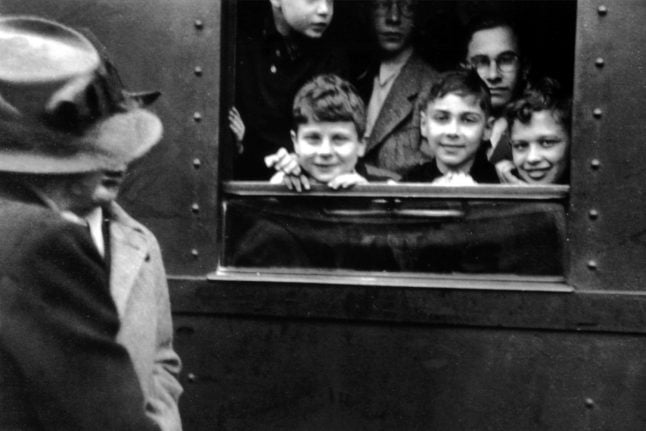 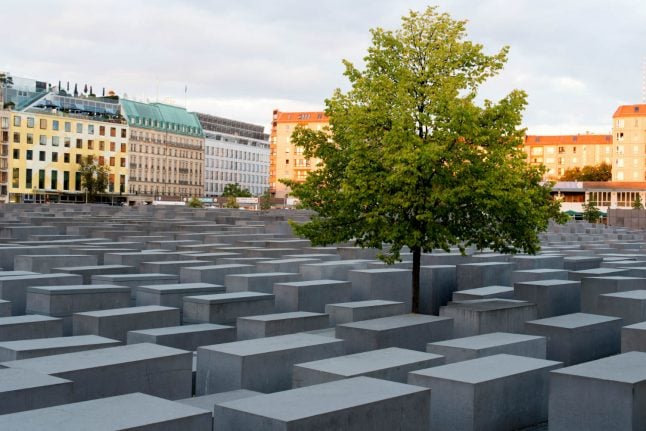 IMMIGRATION
Germany: what I’ve learned from living in the country from which my family once fled
Url copied to clipboard!