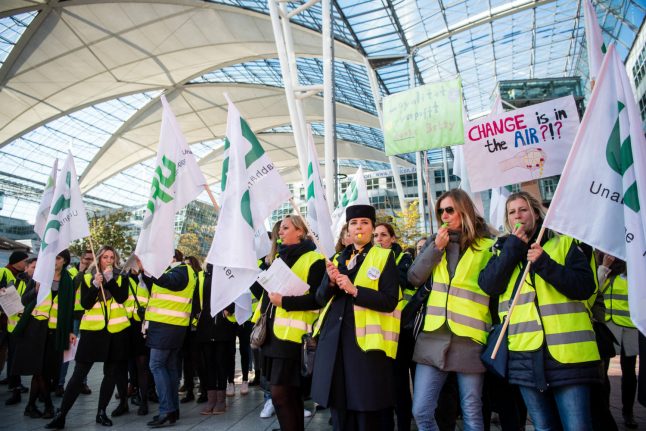 The strike called by Germany's UFO flight attendants' union started at midnight on Wednesday and is due to last until midnight on Friday.

Lufthansa said it was forced to scrap 700 flights on Thursday and some 600 on Friday, warning that tens of thousands of people will be hit by the action.

The UFO union said the stoppage would impact all Lufthansa departures from German airports. In the country's busiest transport hubs at Frankfurt and Munich, a large proportion of planes remained grounded.

A large number of the carrier's lucrative overseas flights have also had to be cancelled, reported Spiegel.

“As a result of the strike, around 180,000 passengers will be affected by a total of around 1,300 flight cancellations,” a Lufthansa group spokeswoman told The Local.

“Lufthansa regrets any inconvenience this has caused passengers.”

The UFO union argued that the stoppage was necessary because negotiations with Lufthansa bosses were deadlocked.

But it accepted a surprise olive branch offered by Lufthansa CEO Carsten Spohr on Thursday, and agreed to preliminary talks over the weekend.

The current strike would carry on as planned “but would not for now be expanded”, UFO said on its website.

Knut Kress, a passenger at a quieter than usual Munich airport, voiced support for the flight attendants.

“It's good that there are still unions defending something,” he said. But 48 hours “is a long time”.

Fellow traveller Birgit Kellner complained about the lack of notice for passengers.

“They should inform passengers a little earlier, not just two days before,” she said.

The walkout is the union's biggest call to action since a week-long strike in  2015 hit Lufthansa with mass cancellations.

It is also seen as a test of strength for the union, weakened by months of infighting that have left Lufthansa questioning its right to speak for cabin crew. Cancelled flights are shown on the board at Terminal 1 of Frankfurt Airport on Thursday. Photo: DPA

Meanwhile, Lufhansa's finance chief Ulrik Svensson declined to put a price tag on the strike, but said these kind of stoppages typically cost “between 10 and 20 million” euros per day.

At Hamburg Airport, connections to Frankfurt and Munich were cancelled, while other flights were shown to be axed on the departure boards. The strike also caused some uncertainty among passengers flying with other airlines. Some feared that they could also be affected by the huge disruption.

According to the flight information on the website, six departures from Düsseldorf Airport were cancelled by 9am.  Over the course of the day, 29 strike-related cancellations were due to affect arrivals and departures, the airport confirmed.

There were also cancellations at other sites across Germany, including in Berlin, Dresden and Stuttgart among others.

Lufthansa said it would run an alternative flight schedule where possible, and that passengers could rebook their journeys for free or swap their flights for train tickets.

“Lufthansa will activate a special flight plan between 1pm and 3pm,” said the spokesperson.

On the firm's website passengers can enter their flight number to find out the status of their flight.

Those who have provided the company with their contact details will be actively informed by SMS or e-mail. The contact details can be entered, viewed or changed at any time on the website under “My bookings”. Passengers can also be informed automatically via Facebook or Twitter about changes in the status of their flight, Lufthansa said.

Last-minute efforts by Germany's largest airline to halt the strike failed after a court in Frankfurt on Wednesday confirmed that the walkout was legal.

“We regret the decision taken by the Frankfurt Labor Court and will file an appeal with the Hessian Regional Labor Court,” the Lufthansa Group spokesperson told The Local.

“We will do everything possible to minimize the impact on our customers who will suffer as a result of this massive strike.

But the flagship Lufthansa brand was spared the upheaval after management offered a surprise two-percent pay rise to avert the strike.

Since then however, UFO's Flohr said no progress had been made in talks.

As well as higher pay for cabin crew across the Lufthansa group, UFO is demanding more benefits and easier routes into long-term contracts for temporary workers.

Lufthansa, however, has long argued that UFO no longer has the right to represent its staff following an internal leadership tussle, and has challenged the union's legal status in court.

But CEO Spohr hinted at a shift in position when he told reporters Thursday Lufthansa wanted to try to resolve the existing legal issues with UFO in the weekend meeting, hoping to then start formal arbitration talks.

UFO's internal disputes have cost it support among the Lufthansa group's 21,000 flight attendants, with some members switching to rival unions.

Separately on Thursday, Lufthansa reported a jump in third-quarter net profits but said it was slashing over 700 jobs at its Austrian Airlines subsidiary as the group seeks to trim costs in the face of fierce competition.