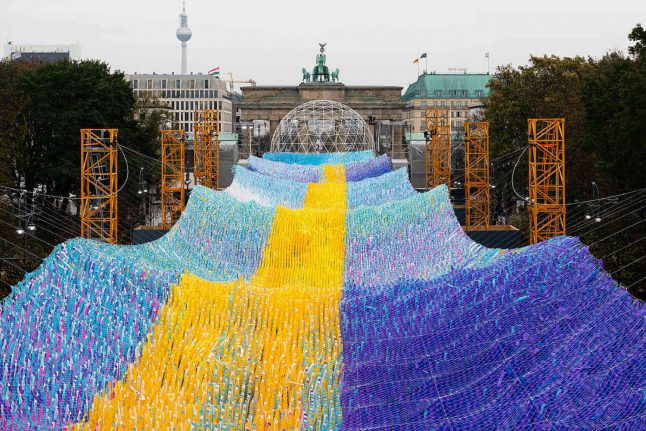 A seven-day city-wide festival is taking place to mark the historic event, which took place on November 9th 1989.

From November 4th-10th, the story of how the Wall came down will be told at sites across the city.

Seven open-air exhibitions will be set up at locations that played a role in the era of upheaval in 1989/1990, including at the Gethsemane Church, Alexanderplatz, Schlossplatz, Brandenburg Gate, Kurfürstendamm, East Side Gallery and the former Stasi headquarters in Lichtenberg.

These presentations, which will consist of historical images and films accompanied by sound installations, will create the backdrop for a multifaceted exhibition and event programme – organized in cooperation with museums, memorial sites, associations, educational institutions and artists groups.

“Discover, experience, join in, and celebrate: The festival week welcomes visitors with a diverse program of over 200 events across all seven locations and seven days,” a Kulturprojekte spokeswoman told The Local.

“This extensive program includes punk concerts and film screenings, exhibitions and panel discussions, readings and poetry slams, sing-alongs and much, much more.”

What's happening – and where?

– A large-scale art installation by American artist Patrick Shearn at the Brandenburg Gate showcases 30,000 messages of peace from residents in Germany floating above the Straße des 17. Juni from November 4th under the title: “Visions in Motion”.

– At Alexanderplatz, visitors will be able to see how hundreds of thousands of demonstrators stood up against the SED (East German) regime on November 4th 1989 thanks to 3D video projections.

– On the building facades of the former Stasi headquarters, visitors will be able to see the demands for the abolishment of the secret police.

– An exhibition in and around the Gethsemane Church on Stargarder Straße in Prenzlauer Berg will show the building's role in the revolution with text panels and images – as well as with an interview project accessible via audio, in which former civil rights activists such as Evelyn Zupke, Ulrike Poppe, Frank Ebert, and the former parish priest Bernd Albani will have their say.

– Stories from Berliners who were separated from each other because of the Wall will be told at Kurfürstendamm.

– At Schlossplatz, in central Berlin, the focus will be on the first free elections.

– And at the East Side Gallery, the exhibition theme will be the artistic takeover of the Wall.

In all of these events, the stories of “Zeitzugen” (contemporary witnesses) will be present for people to explore.

“Open-air exhibitions at each of the seven locations explore the historical backgrounds of the events of 1989/90 through texts and images,” said a spokeswoman.

“The recollections of contemporary witnesses bring the events of 30 years ago to life: Their stories were collected and curated in an extensive interview project, and are featured in the exhibitions in the form of quotes and listening stations.” – The highlight of the week-long celebrations will be a city-wide music festival held on the evening of November 9th, the date the Wall fell.

A number of stages will feature renowned national and international artists whose sounds and stories are connected to the events of 1989/90 or whose work stands for freedom and the breaking down of walls.

At Brandenburg Gate, the German orchestera Staatskapelle, led by Daniel Barenboim, will open the programme before DJ WestBam transforms the historic site into a “European Club Night,” which will also be celebrated in 27 clubs throughout Berlin. What else do you need to know?

The festivities in Berlin are estimated to cost €10 million.

The aim is to commemorate the victims of the dictatorship. It also allows people to experience the historic events of the Peaceful Revolution, and understand this huge part of German history in more detail.

In total there will be more than 100 events, including panel discussions, concerts, guided tours, workshops, film series, readings, poetry slams and theatre productions.

They will tell the story of how the revolution took hold in Central and Eastern Europe, making its way through the wave of successful escape attempts starting in summer 1989, GDR-wide protests and demonstrations, the fall of the Wall in autumn of that year, the storming of the Stasi headquarters and the first free elections in the GDR held in March 1990.

But the 30 year anniversary also means that a whole generation has grown up in Berlin without ever knowing the Wall. The free-of-charge app “MauAR” has been developed for them and others interested in finding out more about how it would have felt in the divided city. On the 30th anniversary of the fall of the Berlin Wall, smartphone and tablet users will be able to virtually explore the Berlin Wall with an app. Photo: Brooks Kraft/Apple/dpa

With the help of augmented reality technology, it will be possible to view the Wall at its locations as a three-dimensional animation on a mobile phone or tablet.

Who's in charge of the events?

The whole project is being carried out by Kulturprojekte Berlin on behalf of the Berlin Senate Department for Culture and Europe and in cooperation with the Gedenkstätte Berliner Mauer (Berlin Wall Memorial), Berlin’s Commissioner for the Reappraisal of the SED Dictatorship, the Robert Havemann Society and other partners.

The full program can be find on the website: www.mauerfall30.berlin