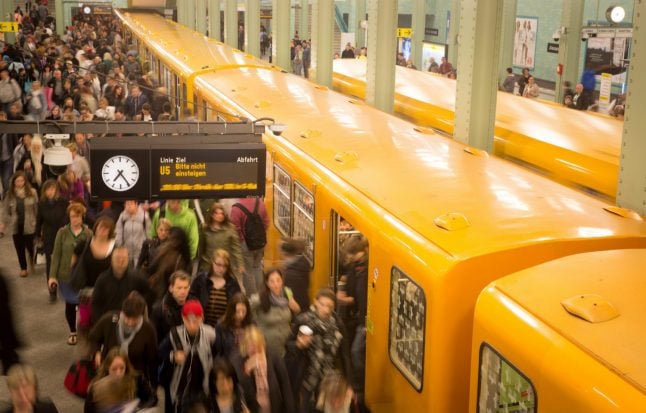 A survey by The Local Germany has revealed more than 60 percent of respondents feel unsafe all the time or sometimes at Germany’s U-Bahn and train stations.

Last week a man died when he was pushed in front of an U-Bahn train at a busy station in Berlin’s popular Kreuzberg district. It follows a spate of similar incidents which have sparked a nationwide debate on security in stations.

On Thursday we asked Local readers to share how safe they feel when they go to get the train, U-Bahn or S-Bahn in Germany.

In just under a day we received more than 50 responses and hundreds of comments. The majority of respondents to our survey – 41.5 percent – said “sometimes they don’t feel completely safe” in stations. And 22 percent said they “don’t feel safe”.

A total of 34 percent said they “felt quite safe”.

We asked for your experiences, too. Although many said they felt mostly safe while using public transport in Germany, others told how they've had to deal with harassment, being followed and even assaulted.

Most of the negative experiences took place in Berlin.

Another reader, Patricia, 26, said she had to deal with a man who was “super drunk, was spitting his food on me and chasing me in the station from side to side”.

Dmitry, 30, got robbed once in a station and said he had met “aggressive beggars”.

“No staff around, nobody cares,” Dmitry added.

Other respondents said fights happening in stations made them feel uneasy, as well as groups of drug dealers.

Hans added: “There are people openly selling and taking heroin on the station platform the entire time it is open”. Hans said this has even taken place while he was taking his son to Kita.

Samuel, 29, a Brazilian in Berlin, said he and a co-worker were harassed and then he was followed because he was speaking English and the harasser believed he was “not German but Turkish”.

“This encounter triggered some anxiety because I fear I might be a victim of some hate/xenophobic attack or wrongly profiled as part of a different community that I don't belong and don't have any roots,” he said.

Liora, 24, said: “Plenty of times I've been alone next to people doing drugs and been begging for my train to come ASAP.

“There is NEVER any station staff doing anything, the very few times I have seen them they are standing around talking and doing nothing.”

Lots of readers said there were social problems that needed to be addressed by the Berlin government, and that was shown by the amount of homeless people, many with visible mental health difficulties, in the train station network.

“There are no present police or security measures,” he added. “This is supposed to be the transport system of the capital city of the richest nation in the EU. There are transport systems in India that are better than this. It's a total disgrace. Shame on the Berlin Senate for allowing the system to be so completely disgusting.”

On Facebook Cheyenne Woodward said she had “feared for my life a few times” in German stations.

Others talked of violent incidents.

In our survey Miha, 20, said “a homeless person punched me in the arm”, while Zahra, 28, also in Berlin, said a woman on a train once hit her arm.

Rafael, 19, said: “A drunk guy threatened me with a knife, there wasn't any staff around to help. I had to calm down the guy and get out of the subway.”

In another unsettling report, Sonal, 25, in Berlin said: “A man started stalking me from Alexanderplatz until Leopoldplatz. He followed me though I changed the train. I was scared and shattered.”

In Berlin, Kottbusser Tor (known as Kotti), Sonnenallee, Warschauer Straße, Görlitzer Bahnhof, Neukölln, Hermannplatz and Alexanderplatz were singled out a number of times as stations where people did not feel safe.

However some readers said they were wary in all stations depending on the time of day.

One respondent said they didn’t feel safe “literally every station in Berlin after midnight”.

On the other hand, some readers told us in our survey and on social media they always felt safe at stations in Germany and didn't see security as a problem.

There were fewer incidents outside Berlin reported to us.

Julie, 36, in Hamburg, said she once felt scared due to two men making her feel uncomfortable at a deserted station late at night.

Meanwhile, others said Frankfurt Hauptbahnhof had an unsettling environment. One respondent said there are “tons of people with no travel business just loitering around looking shifty”.

Raj Singh, 54, who lives in Cologne, said: “It's a society problem with drunken or mentally ill people sometimes.”

In Munich, Sendlingertor was highlighted as a place people didn’t feel safe. One reader said the construction work “makes it feel very closed in”.

What can be done to make stations in Germany safer?

A total of 71 percent of respondents to our survey said Germany needed to do more to make stations safer across the country. And 54 percent said they'd like to see screen doors in platforms in some stations to increase security.

The stations people told The Local they feel safest at have visible staff on the ground, are clean and well-lit. Therefore, respondents said more employees and a larger police presence at problematic stations would be helpful for making people feel safer.

A spokesperson from BVG, the operator of Berlin's U-Bahn system, told The Local that BVG works with police to crack down on criminality in stations.

The spokesperson added that BVG “of course takes both safety and security of its passengers very, very seriously. We have our own security department on duty 24/7 and cooperate closely with Polizei Berlin as well as our partners from Deutsche Bahn and S-Bahn.”

Thank you to all respondents to our survey