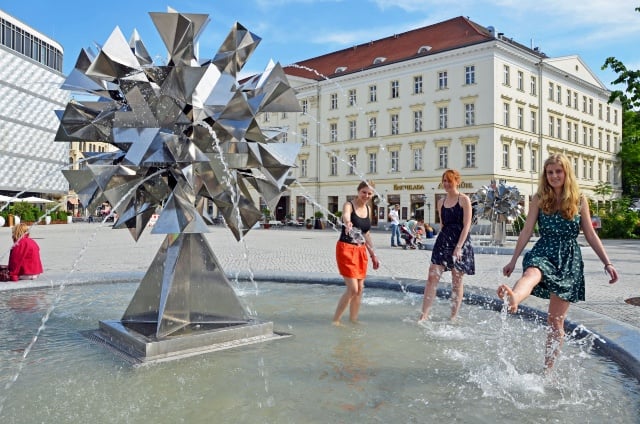 If you want to experience Berlin as it was at its height of cool in the ’90s…you might have missed your chance. Rather, look to Leipzig for your fix of modern-day German bohemia. The up-and-coming city in Saxony ticks all the boxes that made Berlin so achingly hip to begin with — plus a thriving economy and a less competitive job market.

Presenting nine reasons why Leipzig lives up to its hype.

How is it that Germany’s eighth-biggest city has, in recent years, become hailed as ‘the new Berlin’? The reality is that Leipzig is less like the Berlin of the present day, and more like Berlin ‘back in the day’.

Click here to find out more about living in Leipzig

Leipzig is small and typically German – but it’s also liberal and international. There’s a certain unfinished charm to the city; its coffee houses are more shabby chic than hipster cool and many forgotten factories – relics of East Germany – have been converted into creative spaces, like the Spinnerei, an old-cotton-mill-cum-artistic-complex in the cool Plagwitz district. It’s young (but far from dumb)

Leipzig is Germany’s fastest-growing city with its population predicted to rise by 16 percent between now and 2035. Since 2005, it’s welcomed 110,000 new inhabitants, no doubt lured in by the cheap rent and eclectic, open-minded community. Today, Leipzig’s population is predominantly young – the average age is 42 – and educated – nearly a third have university degrees.

Leipzig suffered a period of stagnation following the fall of the Wall. In a mass exodus, around 100,000 people – 25 percent of its population – left the city. Its abandoned buildings are finally being renovated and reoccupied, with many creatives taking advantage of the cheap studio spaces. Among them is Neo Rauch, one of the most internationally recognised contemporary painters.

The Highfield Festival draws a crowd of 35,000 visitors annually, while the Wave Gothic Festival is the largest of its kind – painting the whole city black each year. Leipzig is a city of artists and musicians with a techno scene to rival Berlin’s. Last year, its most-famous nightclub Institut für Zukunft won Germany’s prestigious Spielstätte des Jahres (Venue of the Year) award and in August 2018, Leipzig authorities passed a law to abolish closing time for nightclubs, officially making it the city that doesn’t sleep.

It has a lively student life

Leipzig is a buzzing student city with around 40,000 students enrolled at its various academic institutions. Angela Merkel herself is a graduate of the University of Leipzig — along with German writer and statesman Johann Wolfgang von Goethe and philosopher Friedrich Nietzsche.

Aside from the main university, there are several options for higher education in Leipzig. Art students can enroll in courses at the Academy of Fine Arts, one of Germany’s oldest art academies; the University of Music and Theatre ‘Felix Mendelssohn Bartholdy’ offers programs in music and acting; and students at Leipzig University of Applied Sciences can take courses in subjects ranging from engineering to the cultural sciences. The HHL is Germany’s oldest business school, today churning out entrepreneurs for the digital age.

The UK’s Lancaster University has also recently established a campus in the city so that international students can continue to study there post-Brexit. Leipzig’s economy is going from strength to strength. The city has developed an impressive reputation for all things tech, energy and environment, mobility and creative. It’s an innovative research hub with a strong profile in life science and home to the Translational Centre for Regenerative Medicine and one of Europe’s largest stem cell banks.

Click here to find out more about opportunities in Leipzig

Tech companies like Nextbike and trivago have established in the city – providing plenty of opportunities for local and international tech talent – while behemoths like Porsche, BMW and Amazon are all investing in Leipzig.

Leipzig has also become a magnet for startup founders with an estimated 200-250 startups currently operating in the city. There are plenty of incubators and co-working spaces fueling its sense of community and collaboration and providing fledgeling businesses with both premises and expertise. In fact, Leipzig offers some of the lowest office rental prices and the highest number of flex space operators among Germany’s second-tier cities.

You can afford it

Despite strict rent control laws, you can still expect to pay €12 per square meter for accomodation in Berlin. It’s even steeper in Hamburg where you’ll fork out €12.40 per square meter. In Leipzig, it’s just €6.70 per square meter – on average you’ll pay €512 for a one-bedroom apartment in the city centre – so you can more comfortably afford an inner-city life. Leipzig isn’t solely made up of hip 20-somethings. It’s very family-friendly with plenty of public support to make family life in the city easier and more fulfilling. There are many public and independent schools, including bilingual kindergartens and schools as well as several childcare centres teaching English, French, Spanish, Arabic or Russian.

There’s tons of family fun, too. There are lots of green spaces – like Clara Zetkin Park, a merger of four parks in the south of the city – and many leisure activities for kids like family-friendly museums, the city zoo and the Schreberbad – Leipzig’s oldest bathing facility.

Leipzig is one of the greenest cities in Germany with many beautiful parks in the city itself. The city’s old industrial canals and nearby lake district also provide ample opportunity for fans of canoeing or water sports like surfing.

Moreover, there’s plenty of nature to discover in the greater Leipzig Region. There are more than 20 wild swimming spots, educational forest centres and a dense network of cycle paths and hiking routes. The 30-kilometer Healthland ‘beaver tour’ on the Düben Heath runs from Bad Düben to Bad Scmiedeberg and takes you through superb pine groves, gently rolling landscapes and, with some luck, you might even spot a few beavers along the way.

Leipzig is easily reached by rail, air and bus. It has its own international airport which is under 20 kilometres from the city centre and is only a two-hour drive from Berlin Tegel airport. It’s just an hour and fifteen minutes by train from Berlin and benefits in many ways from its closeness to the capital.

The city itself is still largely pedestrianised and the best way to get around is on foot or by bike. In 2018, 156 million passengers used the city’s trams and buses and a €30 million investment into Leipzig’s infrastructure aims to improve the efficiency of its public transport system.

Click here to find out about opportunities in Leipzig

This article was produced by The Local Creative Studio and sponsored by Invest Region Leipzig.