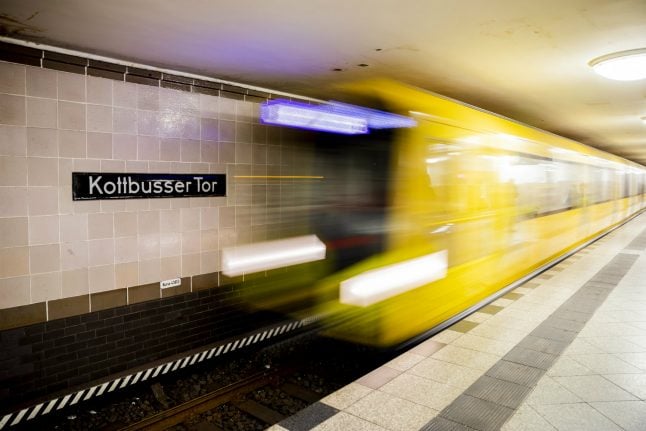 Kottbusser Tor station and the area around it are known crime hotspots in Berlin. Photo: DPA

Investigators believe he was pushed into an oncoming train at the Kottbusser Tor U-Bahn station in Kreuzberg, an area popular with tourists in Berlin.

They are trying to piece together what led to his death which happened around midnight on Tuesday.

Authorities said they were following up on a number of leads, including that he was trying to help his disabled uncle or he was involved in an argument over drugs.

The shocking incident – the latest in a spate of deaths or injuries caused by people pushing others in front of trains in Germany – has led to calls for more security staff at stations in Berlin.

READ ALSO: Man dies after being pushed in front of Berlin U-Bahn station

Did drugs play a role in man's death?

According to local newspaper the Berliner Zeitung, witnesses to the attack told investigators they saw four men trying to rob a wheelchair user shortly before midnight.

The 30-year-old, who was with a disabled man said to be his uncle, intervened. After that two people attacked the 30-year-old.

When the U8 train arrived in the direction of Hermannstraße at around 11.55pm, they pushed the man against it. He is said to have got caught between the train and the edge of the platform.

Onlookers who were on the platform helped free the 30-year-old. An emergency doctor and paramedics from the Johanniter aid organization tried to help the victim, but they were unable to save his life. He died at the scene.

In another version of events, witnesses said the wheelchair user and the 30-year-old man exchanged unknown objects with a group of people on the platform. Moments later the man was attacked.

CCTV footage apparently shows the faces of the perpetrators and the victim. They are all said to be known in the station's drug scene.

Police arrived at the scene with numerous officers and checked several people who wanted to leave the station, but the perpetrators had already fled via Reichenberger Straße.

Relatives of the 30-year-old and his uncle came to the station and some collapsed in shock. They had to be looked after by the fire brigade. The driver of the subway train also needed assistance.

Initially, the criminal investigation department took on the case. Hours later, a homicide department at the State Criminal Police Office took over.

According to U-Bahn operator BVG spokeswoman Petra Nelken, subway traffic on the line was interrupted until shortly after 1am.

Police have asked BVG for all video recordings from the station's surveillance cameras in order to gather more information about the perpetrators and the course of events.

Stations need 'people instead of cameras'

Kottbusser Tor, a popular part of the city, is regarded as a crime hotspot in Berlin

In the first half of this year, police recorded 1,385 crimes there, including 232 drug-related offenses discovered during checks, 191 pickpockets and 126 assaults. Police regularly patrol the area, many in civilian clothes.

In 2018, Kottbuser Tor was deemed to be Berlin's second most dangerous U-Bahn station, based on 119 injuries recorded there in 2017.

The latest incident has led to concerns crime in the area is out of control.

Georg Pazderski, head of the AfD parliamentary group in Berlin, said: “The spiral of violence at the hotspots of crime in Berlin seems to know no end. Despite many statements, the 'red-red-green' (Berlin's coalition government made up of the Left/SPD and Greens) senate seems to have lost control of the criminal scene in Berlin completely.”

Marcel Luthe of the Free Democrats demanded that “the deeply cowardly perpetrators” be pursued with determination and brought to justice. “Unfortunately, such terrible acts show once again the necessity of strengthening the objective security of the BVG through people instead of cameras,” he said.

The shocking crime follows a spate of similar incidents which have sparked a national debate about security at railway stations in Germany.

In July this year, an eight-year-old boy was killed when he was pushed under a high-speed train at Frankfurt's main station by a man.

His mother was also pushed onto the tracks but was able to save herself.

In July, a woman was pushed in front of a train at the station in the small town of Voerde, near Duisburg, in North Rhine-Westphalia. The 34-year-old mother-of-one died at the scene.

Earlier this year, a 41-year-old woman pulled an unknown 17-year-old by her hair onto train tracks at the U-Bahn at Berlin's central Alexanderplatz station. The teenager managed to save herself before a train arrived.

In 2016, a 20-year-old woman died after she was pushed in front of U-Bahn tracks in Berlin by a mentally ill man.

Last month the government unveiled plans on how security and safety will be improved in Germany over the next five years.

In Berlin, police restructuring is planned for 2020, which aims to ensure there is more presence in the inner city, tourist and party districts.

Particularly at night and on weekends, more officers are to be on the beat at hot spots – including Kottbusser Tor. It is planned that a unit with 125 experienced officers be deployed. This is intended to combat drug trafficking and violent crimes.