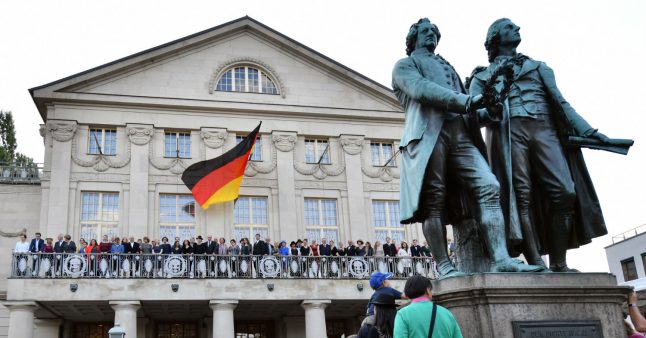 The 'Theaterplatz' in Weimar with a monument of Schiller and Goethe. Photo: DPA

I peered down a spiralling staircase that seemed to go on without end, like it belonged in sketch from surreal artist M.C. Escher. I was not in some abstract dream but rather the interior of the Bauhaus University in Weimar, the city that gave birth to the school of design almost exactly 100 years ago.

While I only spent a day in the eastern city, I felt like I travelled through many different periods of time. Situated in the former East German state of Thuringia, which holds its elections this Sunday, Weimar feels like the ultimate testament to both the richness and complexity of German society and culture. The spiralling staircase of the Bauhaus-Universität Weimar. Photo: DPA

READ ALSO: Why Germany is one of Lonely Planet’s top destinations to visit next year

Weimar, with its relatively small population size of 65,000, holds the heart of German history: it was the base of the German Enlightenment of the 18th Century, and also the home of two of Germany’s all-time greatest Dichter und Denker, Schiller and Goethe, not to mention prolific composer Franz Liszt.

Its name has, however, most commonly been associated with the Weimar Republic, which lasted between 1918 and 1933 and proceeded National Socialism. Despite referring to the entire German state, Weimar ended up in the unofficial title as it was where the founding constitutional assembly took place.

For me, visiting the central Bauhaus building was a nice symbol of how Germany had, quite literally, rebuilt itself. Founded in 1919, Bauhaus would come to be viewed by the Nazis as a cosmopolitan threat to National Socialism, with Bauhäuslers taking refuge throughout the world during World War II.

Only this year, did an impressive Bauhaus museum open its doors. Minimalistically housed in a naturally lit, light grey cube, it holds 168 items from the original Bauhaus days.

One of its most stunning objects is the so-called Bauhaus Triangle, a rocking cube of circles and triangles from one of the school’s most famous instructors, Wassily Kandinsky.

The museum also tells a political history, tracing how founder Walter Gropius and the Bauhaus, deemed subversive by the then ultra-right government in Weimar, were forced to move east to Dessau, and then to Berlin before the Nazis ran them out of Germany for good.

While I had visited Weimar expecting a bounty of Bauhaus architecture, I was not anticipating another one of its beloved attractions: the Ginkgo plant.

The plant was cultivated by the poet Johann Wolfgang Goethe (1749 to 1832), who had a lesser known career as a botanist. It grows in the garden of his former residence, which is open to the public for tours. Goethe was so fond of the plant that he even penned a poem proclaiming his love for it. The first verse reads:

This roughly translates to:

This leaf from a tree in the East,

Has been given to my garden.

It reveals a certain secret,

Which pleases me and thoughtful people.

The city continues to cling onto Goethe’s affection for the plant, with Weimar’s old town filled with shops offering all sorts of products containing it, be it soap, cosmetics or ceramics. And each of Weimar’s charming cafes offers some sort of tea made from Gingko.

If that’s not enough, an extensive exhibit on its history and health benefits is housed in the two-story Gingko Museum.

Every spot tells a story

In my short stay, I took a walking tour through Weimar, finding that every building told its own detailed story.

Particularly impressive is the National Theatre, where the first German democracy was founded in 1918. The famous Theaterplatz hosts a monument of Goethe and Schiller gazing pensively into the distance.

I was also in awe of the Belvedere, a charming park and castle, and the Anna Amalia Bibliothek, famous for its rococo style style of architecture.

For a more sobering history, visit the Buchenwald concentration camp, a 20 minute train ride from Weimar’s Hauptbahnhof. It includes a sprawling monument from when the Soviets took over. Back in the main city square, I relaxed after a day of intense touring with a loyal specialty reflecting Weimar’s eastern roots: the rich Russian Zupfkuchen, while my non-vegetarian friends enjoyed the Thüringer Bratwurst, which can be purchased at one of the city’s many sausage stands.

With elections coming up, it's hard to know what Weimar’s future holds, but it remains one of Germany’s most fascinating stops to view history – be it its people, culture, or food – through the ages.