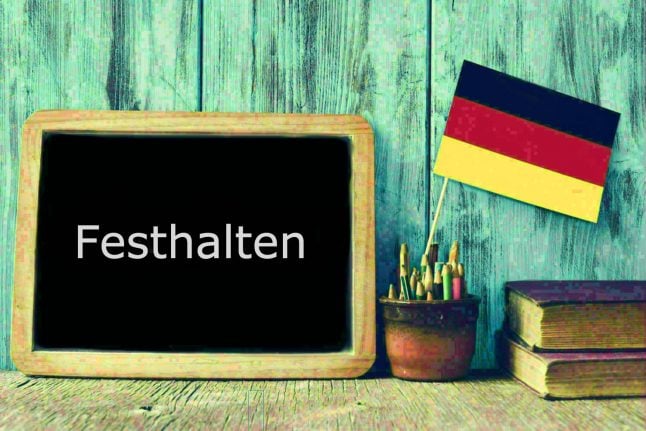 “Festhalten.” Whether used to express that your sticking to your values or to acknowledge an important situation, this common German word has a slew of meanings. Google lists at least nine words as English translations.

Let’s break down exactly what's going on, and how you are most likely to hear or read “Festhalten” in day-to-day life in Germany.

We'll start with a simple definition: “Festhalten” can mean “to hold on.” This meaning can be applied to grabbing or holding for any reason: to avoid a fall, to cling for support, to clip documents together, or to stop the other from moving. A seven-week old Jaguar holds on to her caretaker in Berlin's Tierpark. Photo: DPA

“You must hold on tight to the roller coaster.”

Another definition of “Festhalten” is to capture or detain someone and keep them from leaving an area. This term can also apply specifically to police.

“They apprehended her in the next city.”

The following definition can mean to document or record something through any means. This can include video, audio or the written word.

“It was all recorded in a diary.”

Another definition of Festhalten is to “confirm” or “acknowledge” something important.

“I want to acknowledge that we are all still here and doing well.” 'Festhalten' can also express loyalty to a belief or way of life. Photo: DPA

Finally, “Festhalten” can also refer to a fierce loyalty to something. Someone who is adverse to change, resolutely standing by a tradition or way of life, is “holding on tight.”

“The CDU (Christian Democratic Union) politicians would like to maintain Christian tradition in Germany.”