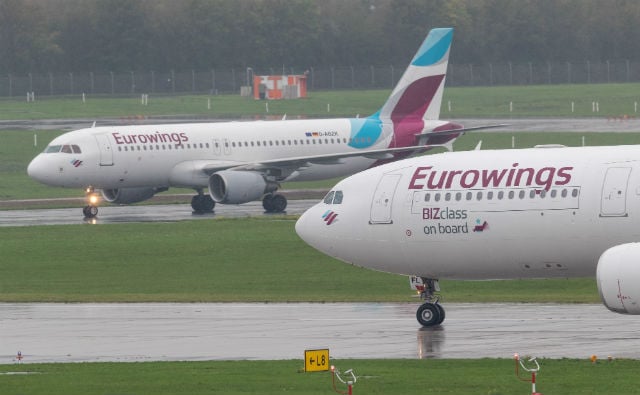 Two Eurowings aircraft at Düsseldorf airport on Sunday. Photo: Friso Gentsch / dpa
The walkout, called by the UFO cabin crew union, was initially set to last from 5:00 am until 11:00 am (0300-0900 GMT) but a worsening spat with Lufthansa bosses prompted the union to extend the strike until midnight.
The industrial action at Eurowings, Germanwings, SunExpress and CityLine led to at least 12 departures being scrapped at Hamburg airport, around 10 in Munich and around 15 at Berlin-Tegel, according to DPA news agency.
Frankfurt airport, the country's busiest, reported “several” cancellations, as did Düsseldorf and Cologne-Bonn.
In a statement, UFO said it had ramped up the strike after the Lufthansa group told employees the walkouts were “illegal” and “endanger your jobs”.
“This is not only wrong, it also signals the next level in the threats against cabin crew colleagues,” UFO said. “This behaviour must be stopped.”
The union had previously called off plans for Lufthansa workers to join Sunday's warning strike after the company unexpectedly offered a two-percent pay hike to flight attendants at the flagship airline.
But other demands for better conditions are yet to be met and UFO has not ruled out further action, with fresh talks at all five airlines scheduled for Monday.
Bosses at the Lufthansa group believe UFO may no longer have the legal right to speak for workers and have challenged its status in court.
Internal disputes at the union have cost it members and support among cabin crew, some of whom have now turned to other representative organisations.