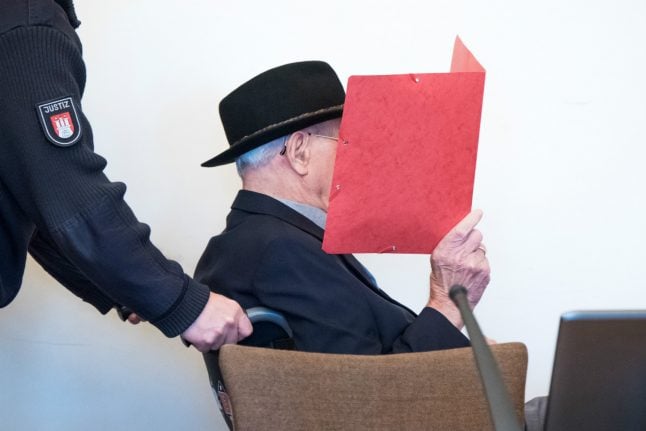 In what could be one of the last such cases of surviving Nazi guards, Bruno Dey stands accused of abetting the murder of 5,230 people when he worked at the Stutthof camp near what was then Danzig, now Gdansk in Poland.

While he insisted that he did not join the deadly operation voluntarily, he voiced regret for his actions.

“That's what he said in his interrogation: He felt sorry for what he did,” said his lawyer Stefan Waterkamp.

“It was also clear to him that (the inmates) were not in there because they were criminals, but for anti-Semitic, racist and other reasons. He had compassion for them. But he did not see himself in a position to free them.”

Seated in a wheelchair, Dey wore a hat and sunglasses and hid his face behind a red folder as he entered the courtroom.

Waterkamp said his client was “ready to respond to all questions”, underlining that Dey “did not join the SS voluntarily. He did not seek to serve at the concentration camp.”

Prosecutors said nevertheless that as an “SS guard at Stutthof concentration camp between August 1944 and April 1945, he is believed to have provided support to the gruesome killing of Jewish prisoners in particular”.

Although the trial comes late, Jewish groups underlined its importance in light of contemporary far-right anti-Semitic violence like last week's deadly shooting in the eastern city of Halle.

“Why are you doing this trial today? Remember what happened in Halle last week,” said Efraim Zuroff of the Nazi-hunting Simon Wiesenthal Centre, in reference to the attack that included a synagogue among targets.

“Old age should not be a reason not to judge… He was part of the greatest tragedy in history, it was his will.”

'Cog in the murder machine'

During Dey's time at the camp, the “Final Solution” order to exterminate Jews was issued by the Nazi leadership, leading to the systematic killing of inmates in gas chambers, while others died of starvation or because they were denied medical care, prosecutors said.

Despite his advanced age, Dey is being tried by a juvenile court in Hamburg because he was 17 when he first worked at Stutthof.

According to German media, Dey, who now lives in Hamburg, became a baker after the war.

The law finally caught up with him as a result of the legal precedent set when former guard John Demjanjuk was convicted in 2011 on the basis that he served as part of the Nazi killing machine at the Sobibor camp in occupied
Poland.

In the same vein, Dey is “accused of having contributed as a cog in the murder machine, in full knowledge of the circumstances, so that the order to kill could be carried out,” prosecutors said.

During pre-trial questioning, Dey said he ended up in the SS-Totenkopfsturmbahn (Death's Head Battalion) that ran the camp only because of a heart condition that prevented him from being sent to the front, according to Tagesspiegel daily.

Dey also reportedly confirmed he knew of the camp's gas chambers, where he saw SS prisoners being pushed inside.

He admitted seeing “emaciated figures, people who had suffered”, but insisted he was not guilty, according to the daily Die Welt.

Since the landmark Demjanjuk ruling, German courts have convicted Oskar Gröning, an accountant at Auschwitz, and Reinhold Hanning, a former SS guard at the same camp, for complicity in mass murder.

Both men were found guilty at age 94 but died before they could be imprisoned.

In April, a German judge suspended the trial of a former Stutthof concentration camp guard after the 95-year-old defendant was hospitalized with heart and kidney problems.