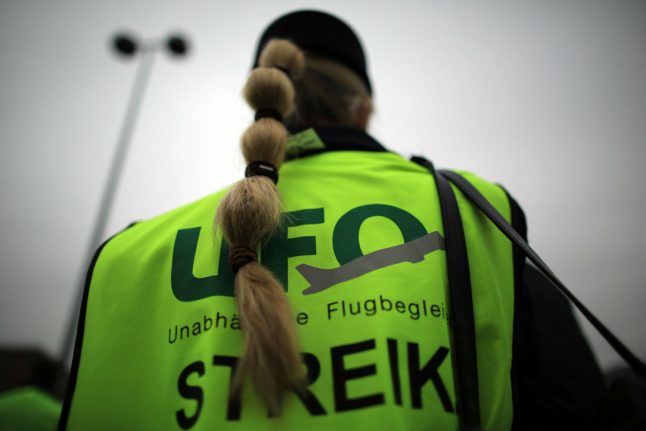 Cabin crew union UFO during a strike in Cologne in 2016. Photo: DPA

“We call on all cabin crew… not to show up to work” between six and eleven am at Germany's two busiest hubs Frankfurt and Munich, UFO chairman Daniel Flohr said in a video message to staff.

At least five of the Lufthansa group's airlines — Lufthansa, Eurowings, Germanwings, Cityline and Sunexpress — would be hit by strikes for higher pay in the coming weeks, Flohr added.

It is still unclear exactly how many passengers and flights could be affected by the strikes on Sunday. Previous job walk-offs by cabin crews at Lufthansa and its subsidiaries has led to several flight cancellations.

Bosses at the airline group believe UFO may no longer have the legal right to speak for workers and have challenged its status in court.

Internal disputes at the union have cost it members and support among cabin
crew, some of whom have now turned to other representative organizations.

“UFO is battling for its life,” agreed business daily Handelsblatt.

“With its far-reaching call for strikes, it wants to show members it remains capable of acting and is representing cabin crew interests.”

Lufthansa could also contest before a court whether UFO has the right to initiate a strike — potentially leaving the worker representatives on the hook for any resulting costs.