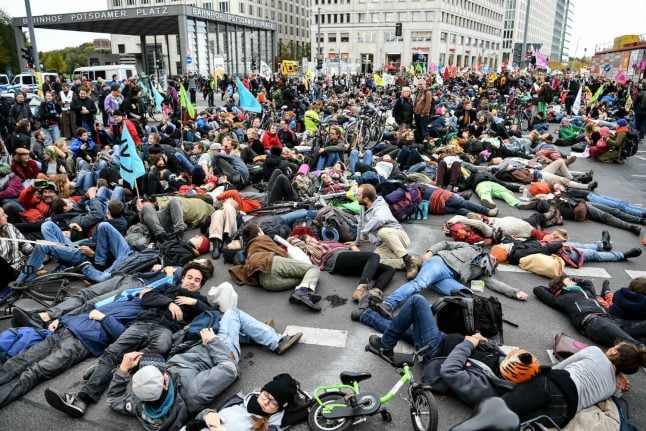 Seated on the floor, Extinction Rebellion (XR) activists are rehearsing blocking a street at the base of a disused building
in central Berlin, one of their planned actions to pressure governments to “tell the truth” about “climate and ecological emergency”.

After the police issue three warnings, “now they're going to clear you out. It's time to close ranks on the ground!” shouts Tori, an energetic 20-year-old organizer.

A young Berliner, she and other activists prefer not to be named.

On this cold autumn morning, the XR group is training non-violent civil disobedience, a core technique of the movement since it was founded in Britain last year.

Around 150 people, from dyed-in-the-wool supporters to total climate protest beginners, have gathered at the “House of Statistics”, a former East German government building close to the unmistakeable TV tower at Alexanderplatz.

In a crash course lasting just three hours, they are being integrated into a global environmentalist movement that has made itself felt across the world since Monday.

The roughly gender-balanced attendees are mostly young, between 20 and 30, and white.

Sitting on the ground wearing woollen hats and scarves against the long hours exposed to the chill, the would-be demonstrators fold their arms beneath their thighs.

“Turn yourself into a little package,” one of the organizers advises.

His dreadlocks tied into a bun, he encourages participants to come together in “buddy groups” of ten or so strong to provide mutual support during the sit-ins. Then fellow activists playing the role of police begin lifting them from the ground to clear them away.

“If I'm arrested, should I let them take my photo and my fingerprints?” asks one man.

“Can I wear an animal face mask?” asks another.

A third wonders “Can I ask them for vegan food while I'm in custody?”

Now the assembly have gathered around a disused dodgem car stand and are passing around a flask of hot tea.

“Hide your face as little as possible during an action… keep ID on you…leave your mobile phone at home,” Tori advises.

Everyone should “ask themselves what their limits are” before blocking a bridge or stopping car traffic, she adds, saying none of the 150 people present should feel bad about leaving a barricade before the police arrive or failing to expose themselves to arrest.

A 28-year-old student calling himself “the lion” tells AFP he's happy to go all the way.

“Civil disobedience is the only way to make my voice heard,” he believes.

Even so, “I'm a pacifist, and I've never been in a fight,” the young man adds.

Nearby, two women are following XR's guidelines by marking a phone number for a legal advice service on their arms, giving them a contact in case they are arrested.

“Extinction Rebellion does not commit crimes,” Tori tells her audience. “It's very important that you don't attack anyone either. Our top priority is non-violence,” she insists, repeating the message several times.

Around 2pm, the training is over, and there is no time for a break before another hundred-odd people arrive for the day's second session.

“Back when we started in February, we were doing one or two training sessions a month. Now it's three per week, and five per day these last few days,” she tells AFP.

Another activist shows up asking “if I'm cleared out by the police, am I allowed to come back and rejoin the sit-in?”, dragging the young trainer back into her work.