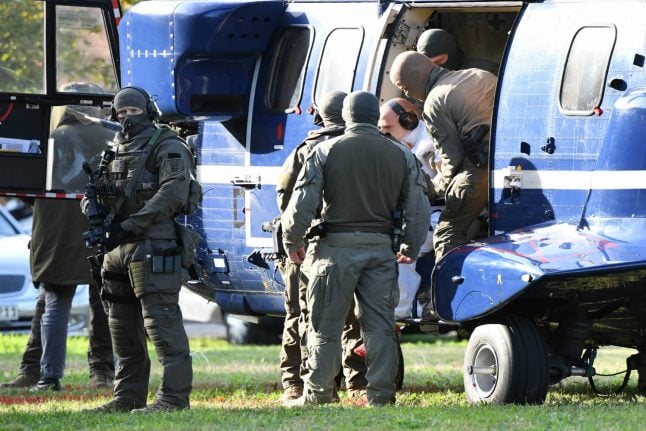 The suspect being escourted by police to Germany's Federal Court in Baden-Württemberg. Photo: DPA

Stephan Balliet, 27, was captured by police on Wednesday after he shot dead
two people in a gun rampage in the city of Halle.

“The boy was only ever online,” spending many hours at the monitor and with few friends, his father was quoted as saying by Bild newspaper, without being named.

Balliet – who on Friday morning admitted his anti-Semitic, far-right motive in Germany's Federal Court – had lived with his mother since his parents divorced when he was 14, the paper said.

While he finished school, he had to break off chemistry studies at university after a serious stomach operation, it reported.

A manifesto he is believed to have posted online contained chemical formulas the writer claimed to have used to produce pipe bombs and improvised grenades.

About four kilos of explosives were incorporated into the various bombs packed into his car, prosecutors said.

Balliet also served in the Bundeswehr (German army), and several people who saw him during the attack said he looked “professional” or trained in weapons use.

But authorities said Thursday he was not previously known to police or security services and had never been investigated for a crime.

Federal prosecutors specializing in terrorist cases have taken on the probe
into what was labelled an especially serious crime.

Investigators had secured evidence in a search of the shooter's home in the
small village of Benndorf, some 40 kilometres west of Halle, or around 200 kilometres southwest of Berlin.

A neighbour told Bild that Balliet worked as a broadcast technician.

His father, who still regularly saw his son, told Bild: “We fought very often, my opinion counted for nothing. I can't reach him any more.”

Balliet “wasn't at peace with himself or the world, he always blamed others”, he added. Throughout a video the shooter made of his actions using a helmet-mounted smartphone, his rage bubbles to the surface.

In the earliest minutes he berates his laptop as it takes too long to load programmes and find a wireless signal, while later he curses as his homemade weapons fail to fire.

Unable to breach the entrance of the Jewish cemetery outside the synagogue, he shoots a passing woman, later firing another burst into her lifeless body and shouting “Pig!”.

But he reserves his harshest language for himself, calling himself a “fucking idiot”, a “failure” and a “loser”.

Bleeding after a gunfight with police as he flees town in his crippled vehicle, he apologizes to the imagined audience watching online.

“That was it guys. A total loser,” he says into the lens before hurling the phone out of the car.

Around 2,200 people are believed to have watched his blundering, violent rampage on games streaming platform Twitch, the Amazon-owned company said — only five of them live.

Balliet's repeated addresses to watching “guys” — and invitation to “be my friend” at the end of a political diatribe against Jews at the start of the video — point to a self-identification with a wider movement, extremism researcher Matthias Quent told DPA.

The use of English and transmission of conspiracy theories targeted at Jews and feminism “are themes of the global radical and populist right”, Quent said.

It was “significant” that he had written and published a “manifesto” in English, tweeted Peter Neumann, a terrorism expert at King's College London.

The choice “clearly shows that he wasn't trying to impress local neo-Nazis, but that his 'audience' was on message forums” online that have previously cheered on far-right killers.

Balliet's alleged document, which has not been authenticated by the authorities, was filled with racist and anti-Semitic slurs and references to message board in-jokes.