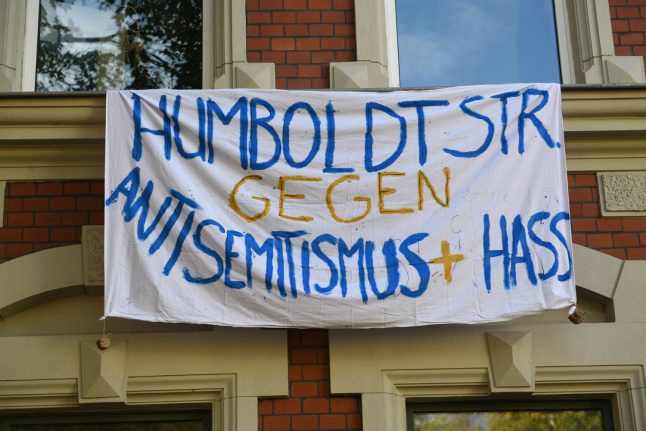 A sign near where the Halle shooting happens reads: Humboldtstraße against anti-Semitism and hate. Photo: DPA

In recent decades there has been a resurgence of far-right violence in Germany with a number of bloody attacks. Here are some of the main groups and issues involved.

The National Socialist Underground (NSU), active in the early 2000s, has become a byword for authorities' failure to take right-wing terror seriously.

Investigators for years blamed a string of violent killings against immigrants on clan violence rather than racism — labelling them the “döner (kebab) murders”.

In fact, the murders of nine Turkish and Greek immigrants and a German policewoman were committed by a far-right extremist trio.

Two of the NSU members – Uwe Mundlos and Uwe Bönhardt – killed themselves in an apparent suicide pact in 2011, while third member Beate Zschäpe was last year jailed for life on 10 counts of murder.

After Zschäpe's sentencing, politicians and others familiar with the case warned that accomplices were likely still on the loose.

Police in June arrested a 45-year-old man suspected of shooting dead a local politician in Hesse state, Walter Luebcke, who was a member of Merkel's conservative CDU party.

Videos of Lübcke defending the chancellor's 2015 decision to leave the borders open to refugees had circulated among far-right groups online.

Police say the man arrested may also have attempted to murder an Iraqi asylum seeker with a knife in 2016, and has links to the neo-Nazi movement.

After the Lübcke murder, the interior minister announced hundreds of new police and security jobs dealing with far-right terrorism, saying the danger was as serious as Islamic extremism.

Other pro-refugee politicians have also fallen victim to attacks and narrowly escaped with their lives.

READ ALSO: Fears of far-right resurgence in Germany after murder of politician

The trial began last month of a neo-Nazi group, “Revolution Chemnitz”, accused of plotting a violent uprising from the Saxon city of the same name.

Eight members aged between 21 and 32 were charged with “forming a right-wing terrorist organisation”.

They allegedly sought to acquire weapons and carry out “deadly attacks” against immigrants, political “opponents”, reporters and members of the economic establishment.

The defendants belong to the hooligan, neo-Nazi and skinhead scene in and around Chemnitz and said they wanted to make the NSU look like a “kindergarten group” in comparison.

They modified pyrotechnics bought in the neighbouring Czech Republic for five explosives attacks between July and November 2015, striking refugee homes, an office and a car of far-left Die Linke politicians and a Dresden
left-wing residential complex.

Seehofer last month warned that “the growing number of weapons and similar objects seized from far-right criminals is alarming”.

His ministry had just released figures showing 563 crimes with a far-right motive were recorded in 2018, including 235 violent ones.

Police found a total of 1,091 weapons, from rifles and pistols to knives and pepper spray, while investigating the perpetrators– up from 676 the year before.

It was a sign of a “massive build-up of arms among the far-right scene”, extremism expert Matthias Quent told public broadcaster ARD.

“They aim to intimidate society and drive out certain groups of people. Parts of the scene even want a civil war,” he added.

Media, prosecutors and security services are investigating suspicions of far-right networks inside the German army.

The MAD military counterintelligence service has been reorganized and had several hundred posts added, partly in response to more frequent reports of dangerous groups.