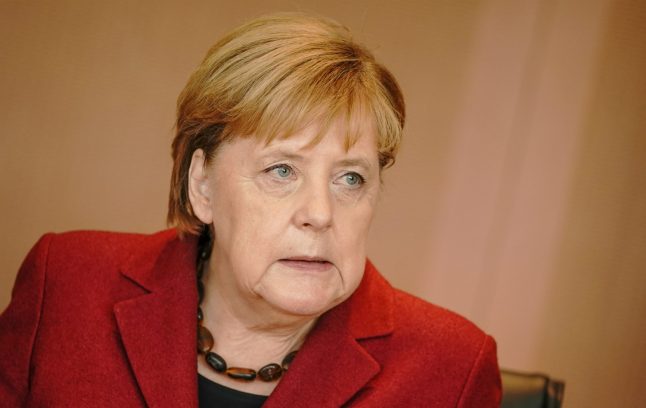 Angela Merkel on Wednesday. Photo: DPA
It was designed to shock: the advert by the Leave.EU Brexit campaign group showed Chancellor Angela Merkel with her hand raised and the words: “We didn’t win two world wars to be pushed around by a Kraut.”

Perhaps it shouldn’t be but my jaw is on the floor. Britain’s reputation is going to take years to recover. pic.twitter.com/UVC1FhypGX

It was shared across the group's online channels, apparently in response to reports from a Downing Street source on Tuesday that Merkel had insisted in a phone call to Boris Johnson that Northern Ireland remains within the EU’s customs union when the rest of the UK leaves the bloc.

After the tweet generated fierce backlash and was described as “racist” in the House of Commons due to the use of the derogatory term “Kraut”, the organization deleted the original posts and apologized.

Co-founder of Leave.EU Arron Banks admitted it “went too far”, but said “the real outrage is the German suggestion that Northern Ireland be separated from the UK”.

He added: “On reflection the point could have been made better.”

Across social media, people shared their anger and disappointment at the offensive poster. On the whole, Germans reacted cautiously, with many saying they know this is not the view of the majority.

Albert Link, political reporter with German daily Bild, said most people in the UK did not feel this way. “But this is the worst post of the Leave-campaign since 2016,” he added. “Disgusting and light-years away from reality.”

Political journalist with weekly newspaper Die Zeit, Jochen Bittner, shared the poster with the message: “No worries, the Krauts know that this isn‘t you, dear Britons.”

For many, the ad was not surprising.

Jon Worth, Germany-based political analyst, consultant and blogger who teaches EU politics at the College of Europe in Bruges, told The Local that Brexit campaigners have “been stirring up that sort of rhetoric over the last six to 12 months and I don’t think that probably anyone in Germany should really be surprised”.

“It goes into the vein of anti-German sentiment in the UK that’s never gone away.”

Worth added that it was “sad and disappointing but not unexpected”.

“I thought the reaction in Germany was typically relatively restrained because Germany has seen that type of thing before in the UK press and unfortunately will have to see it again in future.”

Political scientist Bernd Hüttemann, who is the Vice President of the European Movement International, called the Leave. EU tweet “meaningless because it’s ridiculous”.

He told The Local: “Many people including German politicians, are annoyed that there’s a blame game going on.

“There’s a lot of patience needed for how Westminster and UK politics is these days. And I don’t think this kind of tweet or argument is harming anything but it’s just showing how people are really getting nervous about the possible results (when it comes to Brexit.)”

'Have the British lost their minds?'

German media focused on Tuesday's dramatic developments, which saw Downing Street sources appear to blame  Merkel for pushing the Brexit talks between Brussels and London to the brink of collapse.

Downing Street has not confirmed what the two leaders discussed yesterday and whether the 'source' was correct about Merkel's words.

The report triggered a furious response from European Council President Donald Tusk who slammed Johnson for playing a “stupid blame game” and “risking the future of the UK and Europe”.

Germany did not give much away, with Merkel’s spokesman Steffen Seibert saying that, as was usual, he would not comment on “private, confidential” talks between government leaders. “We're not in the playground, we're dealing with the future of the world economy and every individual in Europe and the UK,” she said.

“We can't allow this destructive and egocentric style of politics to become established.”

In a commentary, German daily Welt asked: “Have the British lost their minds? What's the matter with the British? Haven't we always considered them so reasonable that we even use the English word “common sense” as the epitome of common sense? But today they seem to us to have lost that common sense.”

Another stinging editorial in the Süddeutsche Zeitung said British tactics, like blaming Germany and the EU, are obvious to Brussels but seem to be working with UK voters.

“Merkel is to blame, the Germans are showing their true faces, Berlin has always wanted to subdue us, the backstop for Ireland has always been a trap, the EU must be smashed – these are the spontaneous reactions of British leave supporters on the internet after the news from London that a deal with the EU is now 'quite impossible',” they wrote.

“Boris Johnson's calculation may be transparent in Brussels and outrageous in Berlin. In Great Britain, however, his account seems to work out for the time being.”

With just a few weeks until the next Brexit deadline on October 31st and no agreement in sight, the blame game was bound to ramp up, said Worth.

“We’ve been thinking for some time that the strategy from Downing Street will be to blame someone,” he said. It’s going to be a combination of blaming the EU, blaming France, blaming Germany, or on the UK side, for example blaming the House of Commons.

“It just so happened that yesterday Merkel was in the firing line. Tomorrow it could be Macron. Anyone but Johnson is to blame.”