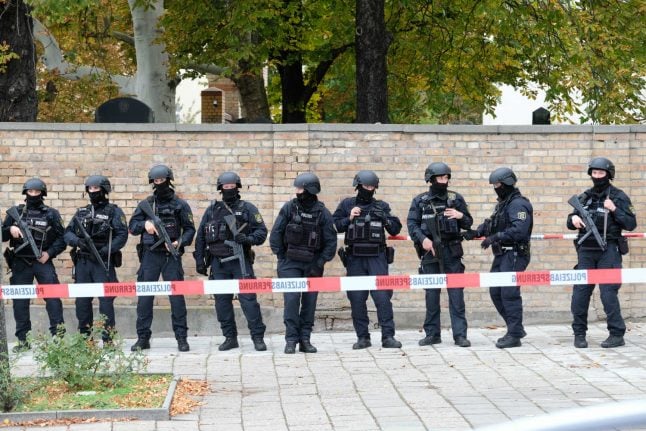 Police at the scene of a shooting in Halle on Wednesday. Photo: DPA

German anti-terror prosecutors are taking over the probe of a deadly shooting outside a synagogue and at a Turkish restaurant at around midday in the eastern city of Halle, a spokesman told AFP.

Following the gun rampage in which at least two people were killed, the spokesman for the federal prosecutor's office said the step had been taken given “the particular importance of the case” which he said involved “violent acts that affect the domestic security of the Federal Republic of Germany”.

Jewish community leaders said the synagogue in Halle was targetted by the gunman who tried to gain entry but were repelled by security guards. Security has now been increased at synagogues around Germany.

Two people were also seriously wounded in a deadly shooting Wednesday in the east German city of Halle which targeted a synagogue and a Turkish restaurant, a hospital said.

“We have two seriously injured people with gun wounds,” Jens Müller, spokesman for the Halle university clinic, told AFP. “They are in surgery.” Police have confirmed two people also died in the gun rampage.

Around 80 people were believed to have been inside at the time to mark Yom Kippur, the holiest day in the Hebrew calendar. A Turkish restaurant was also targeted by a grenade and gunfire.

When the attack occurred police had urged residents to stay in doors.

One of the suspects was later arrested after reportedly hijacking a taxi, but police warned local residents to remain alert.

“Our forces have arrested one person. Stay watchful nevertheless,” police wrote on Twitter.

Eyewitnesses in Halle reported a gunman wearing a combat suit and carrying an automatic weapon.

Deutsche Bahn warned that Halle's main train station is currently closed off, with trains to stop in Leipzig instead.

Police have not linked the attack to the synagogue. But the attack came as Jews around the world are celebrating the holiday of Yom Kippur, a period of fasting and praying following the Jewish New Year (Rosh Hashanah).

Local media reported that shooting took place in front of a synagogue in the Paulus district, and a hand grenade was also flung into a Jewish cemetery.

The suspects apparently tried to enter the synagogue, Max Privorotzki, the chairman of the Jewish community in Halle, said to to Spiegel Online.

“There are currently 70 to 80 people in the synagogue,” Privorotzki added. After the attack security was stepped up at synagogues across the country.

'Hid in the toilet'

Another eyewitness, Konrad Roesler, told news channel NTV he was in a Turkish restaurant about 600 metres away from the synagogue when “a man wearing a helmet and military uniform” flung a hand grenade at the store.

“The grenade hit the door and exploded,” he said.

“(The attacker) shot at least once in the shop, the man behind me must be dead. I hid in the toilet and locked the door.”

Speaking to NTV, a police spokesman said the motive of the suspect or suspects was not clear.

“We don't have any indication about the motive of this act.” Police at the scene in Halle. Photo: DPA

In a separate incident, a police spokeswoman in Halle confirmed that shots were also fired in Landsberg, about 15 kilometres from Halle.

However she did not provide any details about the circumstances of the incident.

An unauthenticated video circulating in German media showed a man wearing a
helmet getting out of a vehicle before firing several shots in the air.

“It is terrible news from Halle and I hope very much that the police will manage to catch the perpetrator or perpetrators as quickly as possible so that no other person will be in danger,” Chancellor Angela Merkel's spokesman Steffen Seibert told a news conference.

“It is terrible news from Halle and I hope very much that the police will manage to catch the perpetrator or perpetrators as quickly as possible so that no other person will be in danger.”

Lübcke's killing has deeply shaken Germany, raising questions about whether it has failed to take seriously a rising threat from right-wing extremists.

Interior Minister Horst Seehofer last month warned of the rising danger of the militant far right, calling it “as big a threat as radical Islamism”.

Seehofer said that police had uncovered 1,091 weapons including firearms and explosives during probes of crimes linked to the far right last year, far more than in 2017 when 676 were found.

At the same time, Germany has also been on high alert following several jihadist attacks in recent years claimed by the Islamic State group.