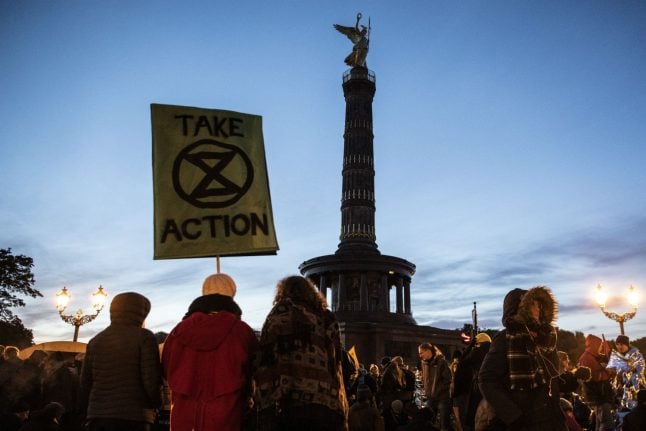 Key elements of a September climate deal struck within Merkel's coalition government were absent from a draft law published by the environment ministry, including a binding goal of “climate neutrality” by 2050 and a powerful
oversight role for an independent commission of experts.

Monday's new pitched battle over the climate law comes as “Extinction Rebellion” protesters, who call for direct action and civil disobedience to pressure governments into more drastic environmental protection, blocked a major roundabout in the heart of Berlin.

Police confirmed that around 1,000 people had blocked the busy “Großer Stern” intersection in the Tiergarten park from four am.

Even within the coalition, some among Merkel's junior partners the social democrats (SPD) were riled by the draft law, set to be passed to parliament by ministers Wednesday.

“If (Merkel's conservatives) further weaken the climate package, it will be nothing more than a paper tiger,” said Karl Lauterbach, a left-wing contender in the SPD's leadership race.

“The climate protection law that we will pass in the coming days will anchor exactly these national climate goals for 2030” which the country committed to in Paris, he added.

In a speech in Sinsheim, southwest Germany, Merkel promised that “monitoring and oversight will be anchored in the law in a way that is crystal clear”.

Berlin has been under pressure to make its climate measures more credible.

Ministers have acknowledged the country will fail in its aim to reduce emissions by 40 percent of 1990 levels by next year, while tens of thousands of young people have taken to the streets every week for months in “Fridays for Future” demonstrations.

But Merkel's coalition of centre-right conservatives and centre-left social democrats are keen to preserve social peace, with an eye on “yellow vest” protests that hobbled France last year over higher fuel taxes.

“To just make everything more expensive overnight, when people can't avoid
it because they've just bought a new car, would not only be disproportionate
in our view, it wouldn't make anything better,” Merkel aide Braun said.