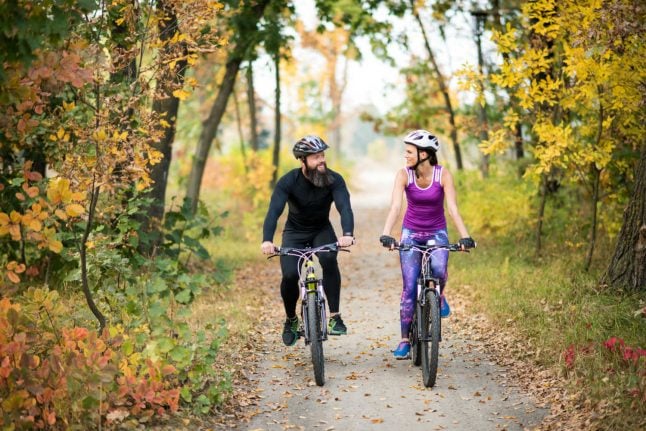 Readers enjoy the German way of life, including their love of nature. Photo: DPA

Whether it’s for work, to study or to explore, Germany attracts thousands of internationals every year.

So clearly many people believe Deutschland has a lot of great things going for it. And our readers agree.

Almost 80 percent of respondents to our survey said Germany was a “good” place to live, while just over 20 percent described it as “average”.

So what do people love about settling down in this country? We received nearly 100 responses when we asked you about the good (and bad) points about life in the Bundesrepublik.

As October 3rd marks 29 years of reunification of Germany, we’re focusing on the positives.

The high quality of life thanks to a strong work-life-balance as well as employees’ rights were some of the most frequently mentioned good points.

Emily, 30, from the US and now based in Hamburg summed it up. She said: “I love the focus on work-life-balance, having affordable and accessible healthcare, the good infrastructure and public transportation.”

Bhushan Chaudhari, 29, in Munich, said he loved that in German there's a word for enjoying the time after work – Feierabend.

“I love the work ethics of Germans,” he said. “Working for eight hours and the concept of 'Feirabend' is worth imitating; kudos to you for that! I think this is the biggest value addition to my life after coming to Germany and the biggest lesson that I would take home.”

READ ALSO: Revealed – this is what Germans do (and don't do) in their free time

Readers also ranked public transport highly, with lots of people saying they enjoy not having to own a car because they are able to get around their home by bus or train.

Victoria, 27, an American in Hamburg, said: “The infrastructure of transportation is great. I don't have a car and I don't need one, which saves me a lot of money.

Victoria also mentioned workers’ rights as a huge plus point of living in Germany.

“Where I work, I have 30 paid vacation days per year,” she said.  “We are also still paid normally if we have to stay home sick from work (and we are encouraged to do this so we don't make others in the office sick). It's a completely different mindset that I believe is much healthier in the long run for both the employer and employee.”

Along the same vein, the “reliable” social security system was also frequently praised. One reader also said services for people with disabilities were a positive point of living in Germany.

Lots of opportunities in Germany

It’s no secret that Germany is the EU’s most powerful economy. So lots of respondents highlighted the good things that come with that. There are a lot of vacancies in Germany which can make job searching easier. Photo: DPA

Silviu, 37, in Munich praised the “many job opportunities” – along with the fact Germany is in a “great geographical location, full of choices of lakes, mountains and travel destinations”.

Faisal Khan, 26, from Reutlingen, was another reader who praised the work-life-balance and job opportunities. He also said Germany’s view towards education was “amazing”.

Others praised the affordable cost of living, including Danielle, 28, in Cologne and Jennie, 47 in Leverkusen.

“I am able to afford fresh produce and live a healthier lifestyle.” In the USA, she added, “I tended to have unhealthy diet because fresh and healthy foods are so expensive,” said Victoria in Hamburg.

Lots of readers praised the Germans themselves.

Jaime Hyland, 54, from Ireland and now based in Berlin said: “I love the practical helpfulness of my German neighbours and friends.”

Hyland also said the “continued determination to bear witness to the horrors of the Nazi time” was also something he admired.

Taher Abbas, 26, who lives in Kamp-Lintfort and is from Bangladesh, said: “People are very helpful, it's basically a very friendly environment. The culture is more diverse and open.”

Pete, 66, in Frankfurt am Main said there were “good souls” in Germany.

David, 32, who’s originally from Honduras and now lives in Berlin said he felt people were welcoming.

“Life is lovely in Germany,” he said. “There is a general openness to different lifestyles, I find Germans very welcoming. In other countries I have felt like an immigrant, here I am valued. That being said, I've really enjoyed embracing German traditions, festivities and lifestyle and making it my own.”

Andrew France-Raffeneau, 34, from the UK, said it was “very safe” in Germany and added that people were very “tolerant”. Meanwhile, Aishwarya in Göttingen loves the “punctuality, straightforwardness, and people minding their own business”.

Chitra, 27, who’s from India and now in Schlesweg-Holstein talked about the “wonderful people” she’s met during her internship and studies, and discussed how safe she feels in Germany.

“Meetings and events can be arranged safely per mobile app or Facebook,” she said. “This phenomenon is still under development in my home country – as a woman, I would be far more wary of new encounters.

“I find most people I meet, locals and expats alike to be conversable and extremely respectful of personal space and time. Travelling (within the country and international both) is also a far more safe and pleasant experience than I am used to.”

One respondent praised the dating scene, claiming it’s nice to date Germans because “they are not jealous or controlling”.

Of course, it’s difficult to write an article about what people love about Germany without mentioning the picturesque mountains, hills and lakes.

And it seems, nature is a big plus point for lots of our readers.

“I actually had no idea how beautiful Germany was before I moved here.”

Others said they liked the German love of the outdoors and the culture that comes with that, such as sports clubs and associations.

Many people also mentioned the concern for the climate and care for nature as a plus point of living in Germany.

Joana, 28, who lives in Tübingen and is originally from Portugal, finds “environmental protection” and nature to be huge positives.

Kim Dallas, 59, from Rhineland Palatinate praised the “beautiful countryside: the forests are a walker's paradise.”

The weather was a positive for many of our readers, with many people praising the fact Germany has “proper defined seasons”. Although we’re guessing it really depends on what the weather is like in your origin country. Lots of our readers are, unsurprisingly, taken with Germany's strong bread and beer selection (we're definitely with you on that).

Michael Lowe, 32, from England and now in Berlin said he loved the “casual beer drinking culture and “ridiculously good bakeries”.

Another reader said Germany makes “the best bread in the world.”

“Awesome bread, beer, coffee, cheese, Riesling and chocolate,” were some of the plus points highlighted by Nancy, 34, in Hamburg.

Thank you to all our readers who contributed to this article by filling out our survey.