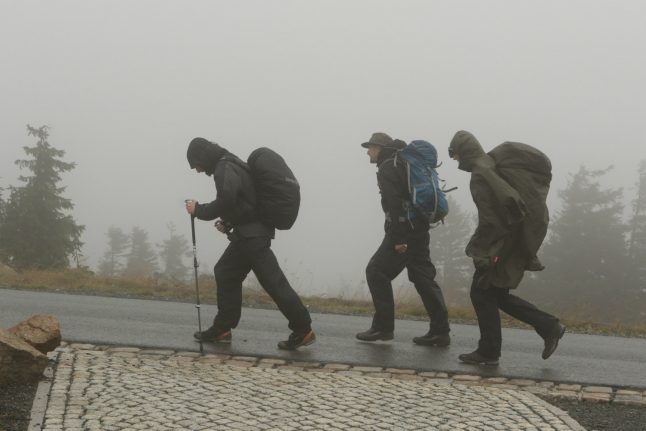 Hikers battle the weather in Saxony-Anhalt on Monday. Photo: DPA

The storm dubbed ‘Mortimer’ moved away from Germany in the night, but a new weather front has arrived. And it brings it with it heavy rain, thunderstorms and cooler temperatures.

On Monday, the weather caused severe problems across the country, especially in northern regions.

A man died near Wittenberg in Saxony-Anhalt after his car was hit by a falling tree.

According to police, the man was on a rural road at about 8:30 am when the incident happened. The 41-year-old became trapped in his vehicle and died at the scene.

Emergency services were also deployed in other places due to the weather. In Neuruppin, Brandenburg, a woman became trapped under a fallen tree. A police spokeswoman said on Monday the victim was being treated for their injuries. The stormy weather could be seen in Rostock, Mecklenburg Western-Pomerania. Photo: DPA

On the A31 in Emsland, Lower Saxony, high winds overturned a truck. The driver suffered minor injuries in the accident. He had lost control of the vehicle at Wietmarschen-Lohne and the lorry tipped on its side. The Autobahn between the Emsbüren and Lingen junctions was completely closed in both directions.

A car was hit by a tree on a country road near Möckern in Saxony-Anhalt. The vehicle was heavily damaged but the driver remained unharmed, police reported.

There was also a huge disruption to the train network. Train services were cancelled or delayed as rail workers tried to remove fallen trees and branches from tracks. Some knock-on disruption could still take place on Tuesday.

Meanwhile, fire and rescue teams had to save a deer that had fallen into an empty swimming pool in North Rhine-Westphalia during the stormy weather. The deer had  fallen into the swimming pool and had to be rescued by emergency services. Photo: Fire brigade Ruhr/DPA

On Tuesday, heavy showers, thunderstorms and strong gusts of wind were expected again, with the worst weather in the north and western parts of the country.

The DWD said on Twitter that the new weather front, dubbed Nils, would bring lots of rain, wind and storms to Germany, particularly in the north and west on Tuesday.

In the south sunny spells were forecast but later in the afternoon rain was expected.

As far as temperatures are concerned, Germany is divided: it's cooler in the north and warmer in the south. In Schleswig-Holstein, the maximum temperature is just 8C. But in southern regions, temperatures were set to rise to more than 20C.

The changeable weather is set to continue for the rest of the week, with a mix of showers and cooler temperatures.

There is also a risk of widespread ground frost in the southern half of the country at night.