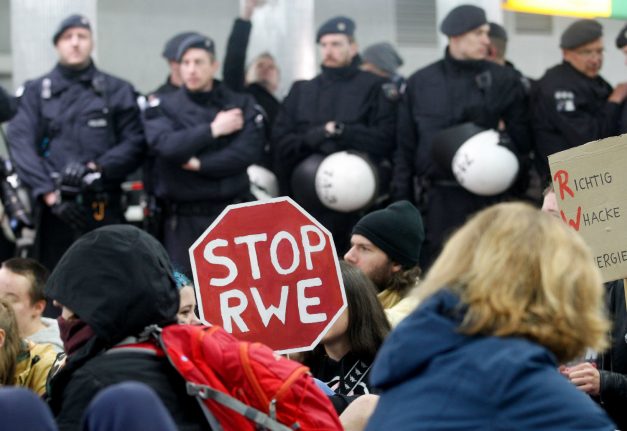 Climate activists at an RWE meeting in May. Photo: DPA

Highly-polluting brown coal and nuclear “laid the foundations we are building the new RWE on… But every form of energy has its time,” chief executive Rolf Martin Schmitz said in a statement.

A massive exchange of assets with EON, which will see RWE specialize in electricity generation and its former competitor focus on grids, is the first step in a new strategy.

It comes as pressure grows on the German government and energy firms to take drastic action to tackle climate change.

Climate activists have been taking to the streets, led by the Fridays for Future movement.

IN PICTURES: Germany takes to the streets in global climate strike

RWE plans to spend €1.5 billion per year on “both offshore and onshore wind turbines as well as photovoltaics and storage”.

That spending could mount to two or three billion euros per year if contributions from partners are counted in.

After a green light from the European Commission, Monday was the first day EON's former renewables activities were integrated with RWE, alongside generation capacity from RWE's former subsidiary Innogy.

The transfers mean the company is now Europe's number three in emissions-free electricity, after Spain's Iberdrola and Italy's Enel.

As well as building up new renewable capacity, RWE plans to shutter or convert all of its coal-fired plants in Britain and the Netherlands by 2030.

Meanwhile, it said it would stick to the 2038 target for ending coal generation in Germany set by a government appointed commission earlier this year.

It is currently in talks with the German goverment over compensation for those closures, totalling around three gigawatts of capacity by 2022.

RWE reduced emissions of greenhouse gas carbon dioxide (CO2) by one-third, or 60 million tonnes, between 2012 and 2018.

In May this year, German students brought their weekly climate protests to energy giant RWE's home turf, grabbing the microphone from bosses to urge a speedier exit from coal at the group's annual shareholder meeting.

RWE's plans to continue burning coal into the 2030s show it “doesn't understand what kind of crisis we're in,” said 23-year-old student Luisa Neubauer, a leading figure of the “Fridays for Future” climate movement in Germany.

Investors critical of RWE's strategy had secured Neubauer the right to speak, as activists and school students outside brandished placards reading “coal stinks” or “our future is melting with the ice”.

“No company in all of Europe bears more responsibility for the climate crisis than RWE,” Neubauer said at the time. “How can you answer for that before me and my generation?”

The German government recently unveiled plans to tackle climate change but activists say the proposals do not go far enough.