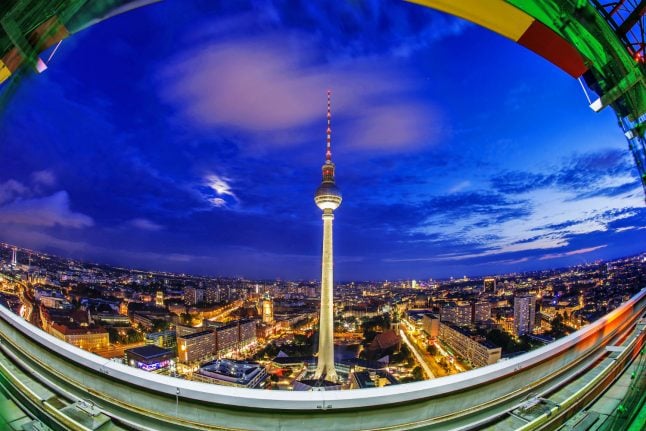 A photo of the TV Tower taken on the panorama terrace of the Park Inn Hotel. Photo: DPA

First opened in October 1969 to mark the 20th anniversary of the German Democratic Republic, the Tower was intended to demonstrate the efficiency of socialism. Even after Reunification, visitors can’t stay away from the tallest building in Germany, measuring 368 meters from ground to spire.

READ ALSO: How to understand Berlin through its landmarks with quirky names

Real turtle soup was on the menu for 3.30 Ostmarks (the East German currency) at the opening of the TV Tower fifty years ago. Whether it was French coffee in a glass for 4.90 or Soviet Vodka, the new East Berlin telecafé, set 270 meters high, offered something special to its customers with a touch of the wider world. Inside the rotating café of the TV tower. Photo: DPA

The café, inside the tower’s characteristic sphere, would turn around completing one rotation in around an hour, offering East Germans, as well as tourists, a panoramic view of the capital. This is still the case today, only now visitors are allowed to experience more than just one turn. And the “tele-café” is now called the Sphere Restaurant.

An emblem for the whole of Germany

Without a doubt, the GDR’s flagship project has become a national emblem for the whole of Germany. Around 60 million people have visited the tower since its opening day, or around 1.6 million every year.

“It’s an honour to work in such a historic place,” says Visitor Service Director Stephan Vogel. “Once upon a time, you were able to look over the Berlin Wall to West Berlin”, said 31-year-old Vogel, who was too young to experience this himself.

Vogel believes the East and West divide is no longer significant, though he explained that he has been asked whether certain windows used to be opaque as a result of their view of the West.

The “Telespargel”, as the East Germans called it, was opened after almost four years of construction near Alexanderplatz on October 3rd, just four days before the GDR’s 20th anniversary.

According to press spokesman Dietmar Jeserich, “the TV Tower was designed to showcase the GDR’s potential”. Coincidentally, the TV Tower shares its birthday with the day of German reunification.

Initially, the TV Tower (which was the transmission tower for East German TV) was going to be built on the outskirts of the city in Müggelbergen, until GDR authorities determined that it would affect the airspace of Berlin Schönefeld airport.

It is believed the new location was personally decided by East German leader Walter Ulbricht, as it fit well with the socialist redesign of the neighbouring Alexanderplatz. A few days before the TV Tower opened, the spectacular World Clock was unveiled to the public on September 30th, 1969. Steel for the TV Tower was purchased from Sweden, with Swedish technicians coming to East Berlin to aid in its construction. The building was designed to be reminiscent of Soviet Sputnik satellites, with the tower being hoisted up by crane.

Overall, 8,000 cubic meters of concrete were used. At a cost of 132 million Ostmarks, the building was four times over-budget. At the time, the GDR party newspaper New Germany wrote that over 300 firms had worked on this “technological miracle”.

One thing that bothered GDR Leaders was when the sun shines on the TV Tower’s tiled stainless steel dome, the reflection usually appears in the form of a cross. Engineers used further materials in an attempt to hide the cross; however it remained. Berliners nicknamed the luminous cross the “Pope’s revenge”.

Today, the TV Tower belongs to the German Funkturm GmbH, a subsidiary of Telekom. A separate catering company is responsible for hosting visitors at the tower. The monument is now immortalized on T-shirts, cups and glasses, as well as on baking dishes and baby rattles.

“The tower is a listed building. Every renovation must be voted on,” says Jeserich. “Some of the original glass elements are still there.” Two lifts travelling at six meters per second bring customers to the restaurant. Sybille Janke, restaurant manager, started there as an apprentice in 1996. It was one of the few specifically East German jobs still recognized after the fall of the Berlin Wall.

“Today everything is built up, but people sill want to see the history of Berlin,” she said.

Janke is reliant upon technology. Due to limited space, food has to be prepared downstairs then brought to the restaurant by elevator. The restaurant offers a culinary journey through time, their famous solyanka (a spicy Russian soup which was highly popular in the GDR) is a must-try!

The restaurant contains 40 bolted-on tables, where guests can enjoy the rotating views. Janke, a native Berliner, appreciates her “special job”. In the evenings, when she is the last person there, she says “it’s quiet then, so I like taking in the view”.