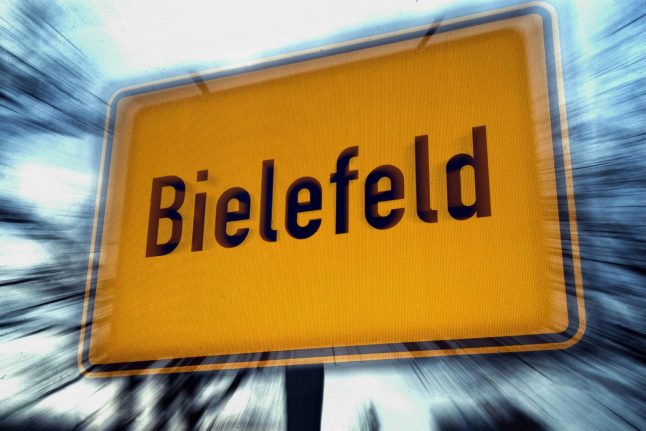 The mythological Bielefeld has now officially been proven to exist. Photo: DPA

In August, the western Germany city of Bielefeld sought to dispel a longstanding conspiracy theory that it doesn’t actually exist.

Its marketing department came up with a simple solution: a €1 million reward to anyone who could prove that there is, indeed, no Bielefeld.

The marketing campaign #BielefeldMillion”, launched on August 21st, received thousands of entries from all over the world, including over 300 from abroad from countries including the US and Russia, reported the Tagesschau.

But now the city of 340,000 inhabitants in North Rhine-Westphalia considers its existence to be proven and has declared the so-called Bielefeld conspiracy to be over.

“The result of the competition is: Bielefeld exists,” said Mayor Pit Clausen at a ceremony on Monday.

In addition to a large number of poems, children's pictures, comics and videos, participants also presented supposedly scientific evidence – with arguments from mathematics, physics, logic and history, according to Bielefeld Martketing.

Bielefeld's marketing department tweeted one of the entries they received from abroad, which was disqualified because it was sent to and received in Bielefeld itself.

“These papers were often not comprehensible to laymen,” explained Jens Franzke, head of communications at Bielefeld Marketing.

“So we had fun cracking this supposed evidence together with scientists from the University of Bielefeld and the Bielefeld City Archives.”

Germany's Federal Office for Geography and Surveying (BKG)  even published a map of Germany – with Bielefeld omitted. In response, Bielefeld Marketing quipped: “First day of school: BKG unfortunately has to serve detention.”

Local companies also chimed in with rewards. A pudding manufacturer and a local condom company each offered a million of their products to anyone who could prove their city’s nonexistence, they announced on Twitter.

Beginnings of a conspiracy

The competition marked the 25th anniversary of the so-called Bielefeld Conspiracy. In 1994, university student Achim Held wanted to demonstrate how quickly conspiracy theories can form and spread.

In a series of postings on Usenet, he noted that you never seem to meet anyone from Bielefeld, nor do you ever hear of any major industry or German innovation originating in the town.

READ ALSO: Why is Bielefeld offering €1 million to anyone who can prove its nonexistence?

However, satire developed into a permanent gag: “Bielefeld? That doesn't even exist” became a catchphrase.

“Our answer to the Bielefeld conspiracy has not only made positive headlines in the whole of Germany, but around the world, and has aroused many sympathies for our city,” Clausen stated.

“After 25 years of Bielefeld conspiracy, we have given Bielefeld its own spectacular final chapter to this strange story,” Clausen added. “Therefore we can now give ourselves the right to say: We say goodbye to the fairy tale that we do not exist at all”.

Held himself said he was also impressed by the city's marketing campaign.

“When I published the satire of the Bielefeld conspiracy on the Internet in 1994, I wanted to make fun of conspiracy theories in general,” explained Held, who said he was not interested in Bielefeld in particular when he made the post.

When the joke became increasingly known over the years, the people of Bielefeld certainly weren't always happy.

“But with this funny action, the city gave the perfect answer to the saying that Bielefeld didn't exist,” Held stated. “Who could say that now?”

In the old town of Bielefeld, there is now even a memorial stone to commemorate the campaign for the Bielefeld conspiracy. The 600 kilogram boulder includes a QR code which, when scanned, takes visitors to the city's official website.

The unveiling of the stone on Monday.

The stone is intended to bring together the history of the 800-year-old city and the with that of one of Germany's first internet phenomena.