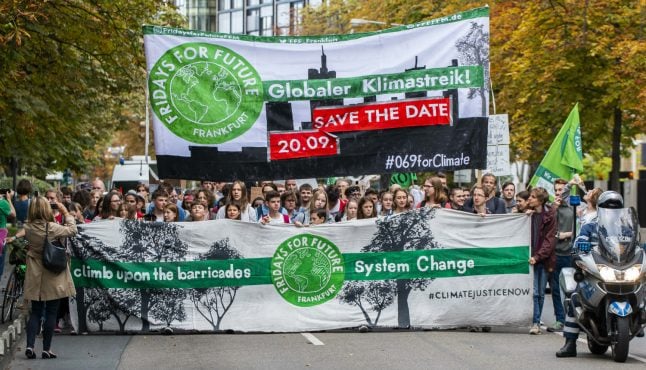 A Fridays for Future demonstration in Frankfurt on September 13th. Photo: DPA

Days before a UN climate summit in New York, Merkel's team was preparing to announce details as the top EU economy, once a green energy pioneer, is bound to miss its 2020 carbon reduction targets.

Political parties were still haggling over the details early in the week, but Berlin was likely to pledge some €40 billion over four years, newspaper Welt am Sonntag reported.

A bone of contention remained how to price the emission of climate-killer CO2 into economic activity – either through a carbon tax or the trading of emissions permits, the option favoured by Merkel.

“Climate protection is a challenge for humankind,” she said in her latest weekly podcast. “We can see that climate change is already a reality. In the past 50 years, storms, heat waves and floods have also tripled in Germany.

“Germany is an industrialized country. In recent decades we have emitted a great deal of CO2 and thus contributed to global warming.”

At the end of Germany's second blistering summer in a row, as fear of climate change has energized especially young voters, the mainstream parties are struggling to catch up on the hot-button issue.

Merkel's government will announce its plan on Friday, a day that's expected to see the biggest international wave of climate strikes yet by the Fridays for Future movement and the hundreds of civic groups that support it.

“We are heading for a life-destroying crisis and so far nothing has happened,” said Linus Steinmetz of the student movement launched last year by Swedish teenage activist Greta Thunberg.

“That's why we're raising the pressure – together we're strong.”

Merkel, a scientist by profession, was once known as the “climate chancellor” as she pushed forward a green energy transition that vastly increased clean renewables such as wind and solar power.

Car-mad Germany has also lagged badly behind in the transport sector, where state-coddled auto giants VW, Daimler and BMW have long focused on gas-guzzling SUVs more than on hybrid or zero-emission electric cars.

“I can feel the will of all coalition partners to actually achieve something that does justice to the scope of the challenge,” he said on ZDF public television.

Speaking separately to Bild am Sonntag newspaper, Scholz suggested that a switch to electric cars could be boosted with “something like a one-million-charging-station programme”.

Scholz's Social Democrats, junior coalition partners to Merkel's conservatives, have also called for a broad carbon tax, which would raise the cost of goods and services reliant on fossil fuels. Angela Merkel at a previous IAA motor show in Frankfurt. Germany has to balance its love for cars with climate protection. Photo: DPA

Merkel's bloc has, however, resisted this, perhaps mindful of how a French plan for a climate levy helped spark the “yellow vests” protest movement.

Her party instead advocates extending the trade in right-to-pollute emission certificates to the transport and building sectors.

The climate package presents a delicate balancing act for the two mainstream parties, which have been under fire from both the far-right Alternative for Germany (AfD) party and the ascendant Greens.

On the one hand, the anti-immigration AfD, which is strongest in the ex-communist east, rails against Merkel's government, wind energy farms and the planned closure of Germany's last coal mines.

On the other hand the Greens' popular co-leader Robert Habeck warned against any half-hearted “fig-leaf policy” on climate and demanded more concrete steps, such as a deadline for banning petrol and diesel cars.