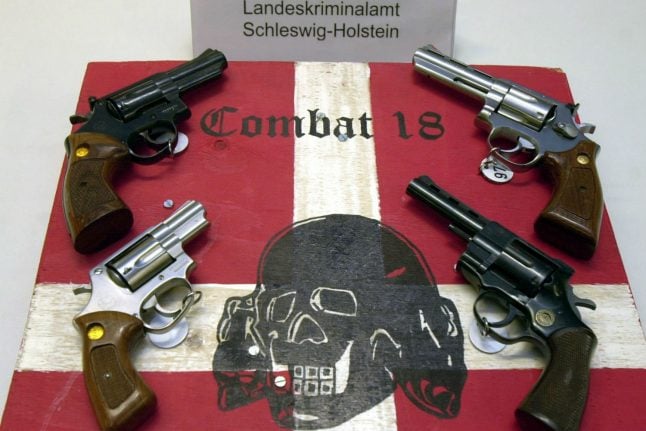 Seized weapons and a shield from the criminal neo-Nazi group "Combat 18" are located in the Schleswig-Holstein State Criminal Police Office (LKA) in 2003. Photo: DPA

The interior ministers of Lower Saxony, Thuringia and Hesse are calling to outlaw the German branch of the international far-right extremist network Combat 18 (C18), which is already officially listed as a terrorist organization in some countries.

“If we can ban Combat 18 on a constitutional basis, we should do so as quickly as possible,” Lower Saxony's interior minister Boris Pistorius (SPD) told the Monday edition of Berlin's taz newspaper.

The relationship between Stephan Ernst, the alleged murderer of Kassel politician Walter Lübcke, and Combat 18 is also currently under investigation.

Pro-immigration Lübcke was killed with a shot to the head in his home in June, spawning a countrywide debate about what can be done to combat right-wing extremism in Germany.

According to the most recent government estimates from May, there are 12,700 far-right extremists in Germany.

READ ALSO: Politician in Hesse killed with shot to head

Founded in the UK in the early 1990s, the Combat 18 network has branches in several countries, including Russia, the US and Brazil. In June, Canada added it to its list of terrorist organzations.

Combat 18 is considered to be “neo-Nazi, racist, xenophobic, anti-democratic and violent group,” according to Germany’s Interior Ministry.

They are regarded as the armed wing of the Blood & Honour right-wing extremist network, which has been banned in Germany since 2000.

The number 18 is a popular code for right-wing extremists, because it is supposed to symbolize the initials of Adolf Hitler, A and H, reported Spiegel Online.

In Germany, its supporters are also said to have contact with the notorious NSU terror cell.

Federal Interior Minister Horst Seehofer has already announced that a ban on the group is being examined.