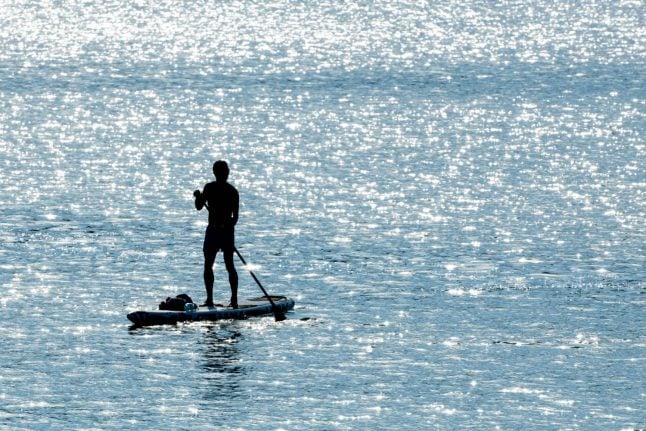 A paddle boarder enjoying the sun at Chiemsee in Bavaria on Thursday. Photo: DPA

A blast of warm air is expected to hit Germany this weekend, with around 30C expected in some parts of the country.

It will make a nice change from recent showers and cooler temperatures – and could be a good time to hit the beach before autumn comes.

Forecasters say the warm weather will be especially strong in the southwest of Germany, but some other areas will also see lots of sun and temperatures in the low to mid 20s.

On Friday it was set to be a sunny in southern regions, with some cloud cover.

According to meteorologists, rain and short showers were to hit the north, northwest and the middle of the country. Over the course of the day, however, the weather was set to improve. The maximum temperatures were forecast to be on average between 21 and 25C.

However, in the Upper Rhine area it was forecast to reach up to 27C, according to the German Weather Service (DWD). It was to be cooler in the coastal areas, with around 19C.

READ ALSO: Farmers to get up to €170 million in state aid after drought ruins harvest

Saturday will start out very cloudy in some parts of the south but the sun will come out later. Warm summer temperatures of between 22 to 27C are forecast.

In the north and higher mountainous regions highs of 17 to 21C are forecast.

On Sunday it will get even warmer. Again, it could start out foggy but when that clears there will be a blast of sunshine.

Highs of 24 to 28C are forecast, and the mercury could even get up to 30C in parts of Baden-Württemberg.

It's the perfect weather for taking a dip, although sadly many open-air swimming pools may have already closed for the season. If that's the case then one of Germany's many lakes are a good alternative.

In the north of the country, temperatures won't be as high and people living there could experience some more drizzle over the weekend.

Summer will fizzle out

At the beginning of next week the warm temperatures will likely fizzle out and give way to a blast of cooler air.

The DWD said “changeable and partly windy weather with showers” will hit the country.

All the more reason to make the most of the warm weekend sun.