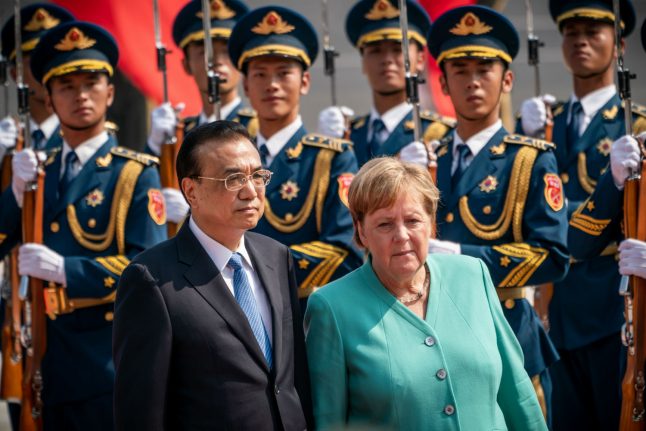 Hong Kong has been plunged into months of pro-democracy protests, and ahead of her three-day visit to China this week protestors in the semi-autonomous city appealed to the German chancellor to support them in her meetings with China's leadership.

In a tweet Friday, spokesman Steffen Seibert quoted Merkel as saying: “The rights and freedoms of the people of Hong Kong must be guaranteed. Solutions can only be found in dialogue; do everything possible to prevent violence”.

Merkel arrived in China on Thursday with a large business delegation in tow.

Merkel said she had discussed tensions in the former British colony, and
civil rights there, with her hosts and had “pointed out that these rights and
freedoms must of course be guaranteed”.

“In the current situation everything must be done to avoid violence,”
Merkel said at a joint press conference with Li, as seen in video footage
published by German media.

“And the solutions can only be found in a political process — meaning
through dialogue.”

Merkel arrived in China on Thursday with a large business delegation in tow.

The companies travelling with Merkel include Volkswagen, Allianz and
Deutsche Bank according to the German daily Bild, which carried a headline Friday that read: “Do our companies not care about Hong Kong's freedom?”

Press access to her visit was unusually tight, with a number of members of the Beijing foreign press corps, including AFP, unable to get accreditations for the event. Chinese officials cited a lack of space due to a large contingent of journalists accompanying Merkel.

Prominent movement leader Joshua Wong and others recalled in an open letter published by top-selling Bild daily Wednesday that Merkel grew up in the communist police state of East Germany.

“You have first-hand experience of the terrors of a dictatorial government,” the letter read.

They also warned that “Germany should be on its guard before doing business with China, as China does not comply with international law and has repeatedly broken its promises”.

Hong Kong has endured dozens of sometimes violent pro-democracy protests triggered by opposition to a now-withdrawn law that would have allowed extradition to mainland China.

A number of Chinese dissidents have been given refuge in Germany, including dissident-artist Ai Weiwei.

Hong Kong has endured dozens of sometimes violent pro-democracy protests triggered by opposition to a now-withdrawn bill that would have allowed extradition to mainland China.

In their open letter, the protesters also warned that “Germany should be on
its guard before doing business with China, as China does not comply with
international law and has repeatedly broken its promises”.

In May, two former Hong Kong independence activists were granted refugee status in Germany in what is one of the first cases of dissenters from the semi-autonomous Chinese city receiving such protection.

On a visit to China last year, Merkel met with the wife of a Chinese human
rights lawyer charged with state subversion, an extremely rare meeting between a dissident and a visiting head of state.

The trip marks her 12th visit to China as chancellor.

Xinhua said in a commentary on Friday that Merkel's visit came as
“productive cooperation between the world's two major economies is much needed against the backdrop of global uncertainties”.

The agency said China accounted for the largest share of imports into
Germany in 2018 with goods worth €106.2 billion.