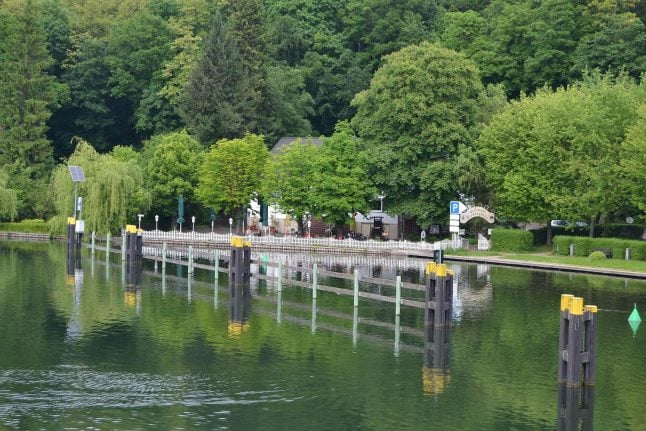 View of the Kalksee and one of Wolterdorf's lakeside restaurants. Photo: Wikimedia Commons

As an old film fan, I had already marvelled at the famous former production studios in Brandenburg’s Babelsberg and the comprehensive film museum in neighbouring Potsdam.

But little did I know that a summer hike through the flat yet idyllic forests of Berlin’s neighbouring state would lead me to a tiny town sometimes lovingly dubbed by locals as “Wollywood” for its rich cinematic history at the turn of the twentieth century.

Officially called Woltersdorf an der Schleuse, the community with just over 8,000 residents is nestled in nature, as it’s surrounded by forests and three lakes. It’s little wonder that many Berliners have summer homes overlooking the water here.

Yet despite its holiday charm, Woltersdorf feels like an independent-minded mini city: it’s the smallest community in Germany to have its own tram system, which travels around its 9.14 square kilometre mass. I reached Woltersdorf after wandering through the woods from Erkner – an S-Bahn end station that was a direct ride from the centre of Berlin.

I first set my sights on a 25 metre high viewing tower (Aussichtsturm), which was built in 1886 and completely refurbished in 1990 after suffering damage in World War II.

I headed up winding stairs to find the Filmmuseum Woltersdorf, which hosts a permanent exhibition called “When Woltersdorf was still Hollywood”.

The small Sammlung (collection) hosts a mighty movie exhibition focused on the 1920s, including autographs from German greats of the time such as Emil Jannings, Lil Dagover, and Mia May, old black and white photos from filming, press releases, and film excerpts.

Even more interesting, several of the films the permanent exhibition focuses on were filmed in the tower itself such as “Das indische Grabmal“ or The Indian Grave (1920), “Herrin der Welt” or Mistress of the Word (1919) and later “Der Tiger von Eschnapur”  – The Tiger of Eschnapur.

All in all, around 100 films were directed in the region, and I could understand why: the quaint and charming community reminded me of a bygone era.

It was also serene and stunning, with promenades or walkways leading out its three lakes (Bauersee, Kalksee and Flakensee). Germans gleefully gathered around an ice cream stand. I purchased a cone, savoring it while watching the breeze on the water and listening to the chatter of children eager to jump in.

I then strolled down the Strandpromenade (Beach promenade) am Flakensee, which leads to the Liebesquelle, a natural fountain.

The water trickles in a stream down to another filming destination: the neighbouring village of Rüdersdorf. Its limestone quarry, in operation for centuries, was used as an alpine backdrop, appearing to form rugged cliffs in the black and white movies.

In more recent history, the strangely structured towers of its “Museum Park” served as backdrop for the 2014 Blockbuster film Monuments Men. Woltersdorf experienced its glory days in film in the roaring 20s but much darker times would come to the former East German community.

A solemn stone memorial at the corner of Berliner Straße and Baumschulenstraße stands in memory of those persecuted by the Nazi regime.

The creator’s father, Karl Holzfäller, belonged to the communist resistance fighters and was murdered in 1945 in Brandenburg-Görden.

Nearby is a Soviet cemetery for prisoners of war and forced laborers.

Large parts of Woltersdorf were damaged or destroyed by artillery fire in the last days of World War II and today have been rebuilt or renovated.

Now the community still sparkles with Wollywood charm, both for locals and the many Ausflügler (day-trippers) like myself that wander by in the summer months.