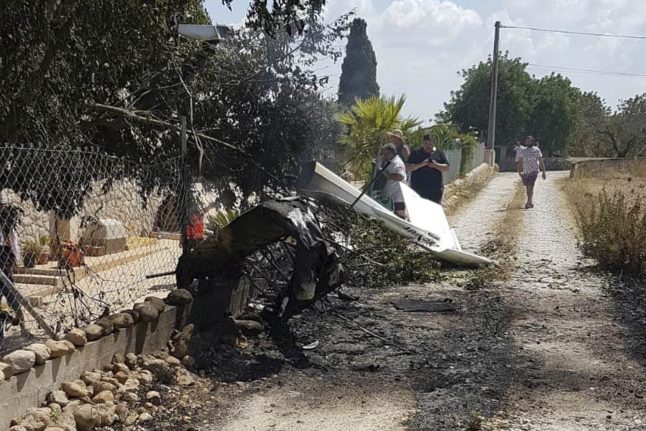 Wreckage following the crash in the central town of Inca. Photo: DPA

Four of the victims were Germans, confirmed Germany's Foreign Office to DPA on Monday morning.

The two aircraft crashed over the central town of Inca at 1:35pm, the regional Balearic Islands government said on its Twitter account.

Everyone aboard the two aircraft – two on the plane and five on the helicopter – perished in the crash, a police spokesman said.

A couple and their two children were aboard the helicopter along with the pilot, the spokesman told AFP.

A family of entrepreneurs

The family was from Munich, and the children were 9 and 11 years old, according to German media reports.

Father August Inselkammer Jr., 43, comes from a prominent family of entrepreneuers, and was CEO of Isartaler Holzhaus, a pre-fabricated housing company.

His family members are known for running well-known Bavarian breweries and hotels. His uncle Franz runs, together with his wife Angela, the brewery Aying, and his cousin Peter is owner of the Hotel Platzl in Munich.

August Inselkammer Sr., together with his father of the same name, had managed the Isartaler Holzhaus in Holzkirchen until his death in April of this year.

The employees of Isartaler Holzhaus met in the morning for a work meeting. “We are all shocked,” reported one staff member to the Süddeutsche Zeitung.

Five years ago, the Inselkammer family had been badly affected by another accident: Jannik Inselkammer, the co-owner of the Munich Augustiner brewery, died while skiing in Canada. His father Hans and August Inselkammer Sr. were cousins.

The helicopter was registered in Germany, and German company Rotorflug Helicopters confirmed the fatal crash of one of its helicopters.

“The cause of the accident is still completely unclear”, the company, headquartered in Friedrichsdorf near Frankfurt, said in a statement. “The authorities have started investigations.”

According to its website, Rotorflug offers sightseeing flights over Mallorca on three routes from 15 to 30 minutes and  for €87 to €167.

Police said the two aircrafts crashed into a field but did not yet have any additional information.

Mallorca and the other Balearic Islands are popular destinations for German and other foreign tourists, especially in the summer season.

Spanish Prime Minister Pedro Sanchez expressed condolences to the victims' families, and said in a tweet that he was “following the news from… Mallorca with concern.”