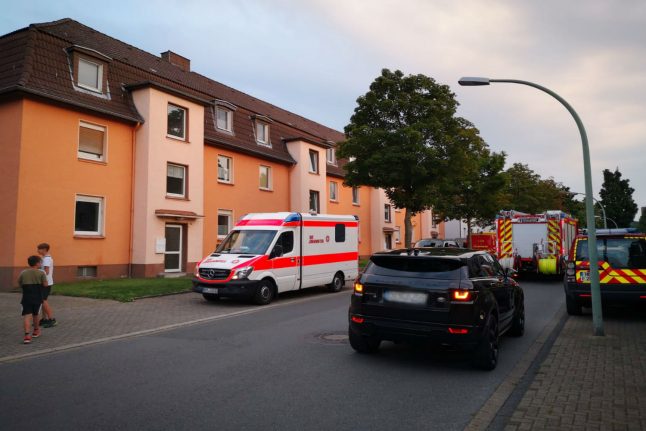 Emergency vehicles line the street as four houses are evacuated in search of the missing Cobra. Photo: DPA

A woman spotted the snake in a stairwell on Sunday afternoon and called the emergency line.

The city, situated in the Ruhr region of North-Rhine Westphalia between Bochum and Gelsenkirchen, sent a fire brigade, ambulance, and two snake experts, spokesman Christoph Hüsken told WAZ. But the snake had moved on – and it’s not clear where to.

Authorities evacuated four homes, as they’re connected at the basement level, forcing about 30 people to find alternate housing. It’s not clear whether the snake is still in the building or has escaped into a nearby cornfield, WAZ reports.

Hüsken warned anyone who saw the snake not to touch it, adding that anyone within a 500 meter radius should take caution. Air conditioning and ventilation systems should also be turned off. Flour sprinkled in hopes of tracking the cobra. Photo: DPA

The flour, sprinkled across various surfaces, is intended to collect traces of the reptile’s slithering path, while the double-sided tape has been laid in hopes that the cobra would stick to it.

Authorities say that the snake’s owner had a permit for the cobra, and some 20 other poisonous animals that live in the apartment. All was well on the last visit to the home, authorities told WAZ.