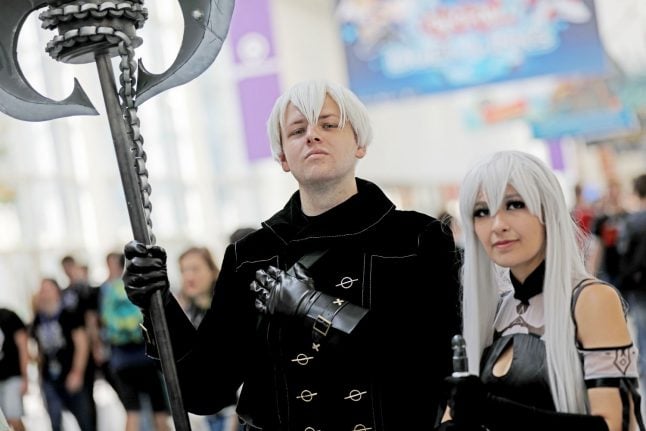 Gamescom visitors dress up as characters from the game 'Nier: Automata' on Wednesday. Photo: DPA

Experts and fans alike at the Gamescom trade fair in the German city of Cologne rejected the link between popular first-person shooter games and real-life massacres that have become tragically common especially in the United States.

“We must stop the glorification of violence in our society,” Trump said after 31 people were killed in two separate back-to-back mass shootings in El Paso, Texas, and Dayton, Ohio, earlier this month.

“This includes the gruesome and grisly video games that are now commonplace
— it is too easy for troubled youth to surround themselves with a culture that celebrates violence.”

But Pascaline Lorentz, an expert on the sociology of video gaming, charged that “Donald Trump's argument is totally outdated”.

“It has been more than 20 years since studies on violence in video games and films completely deconstructed this argument,” she told AFP.

“These studies say that there is no causal link between violence in games and violent acts perpetrated by players.”

The sociologist argued that playing violent video games is even a healthy way to let off steam.

“It feels good to let go of yourself,” she said, adding that people need to “cry, scream, run or strike to bring out some negative emotions”.

“What is dangerous is blocking the process of emotional and sensory
balancing.” Visitors line up for Gamescom, which runs from August 20-24th in Cologne. Photo: DPA

It's a sentiment shared by Celina Bausch, 22, who was waiting to try the latest version of the “Call of Duty” series on show at Gamescom.

“As a player, you're used to hearing this kind of criticism, but I don't really take notice as it's not serious,” she said.

The goal of the gun-totting game is “not to kill” for the sake of killing, but to use tactics to progress through the levels, insisted another queueing fan, Tim Köhler, 21.

Julien Villedieu, from French gaming industry body SNJV, argued that given the diversity of types of games, “reducing video games to violence is a mistake”.

The video gaming industry has long been accused of having a negative impact on the behaviour of gamers, especially young people.

In the United States, the issue first came under the spotlight after the release of violent first-person shoot'em-up games Wolfenstein 3D (1992) and Doom (1993), which popularized the genre.

Criticism intensified after the murder of 12 pupils and one teacher during the Columbine High School massacre in 1999 in Colorado, committed by teenagers who were fans of Doom.

In comparison, shooting massacres are rare in South Korea or Japan, pioneers of the gaming industry where Nintendo, Sega and Sony originated. Both Asian nations  spend more per capita on video games than the United States.

Köhler, the gamer, said he feels Trump's criticism of gaming aims to distract from liberal US gun laws and the right to bear arms, a cornerstone of the US Constitution.

“Video games are played all over the world, but the main shootings take place in the United States,” he said.

“Maybe we should look at the problem differently.”