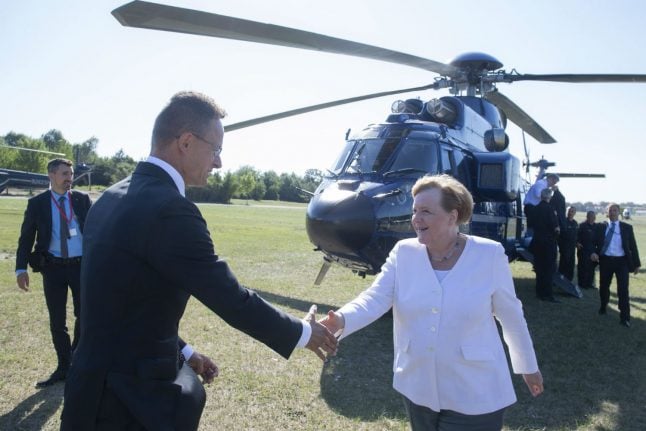 Merkel is greeted by Peter Szijjarto, Hungary's foreign minister, as she arrives in Sopron on Wednesday. Photo: DPA

Speaking alongside her Hungarian counterpart Viktor Orban — with whom she has clashed in recent years over the issue of migration — Merkel said the “Pan-European Picnic” held at the Austro-Hungarian border in 1989 reflected the values of “solidarity, freedom and a humane Europe”.

The two leaders were addressing a church service in the city of Sopron to mark the anniversary of the picnic, during which at least 600 East Germans crossed the border and escaped to freedom in the West.

The “most successful picnic ever” was an inspiration for the fall of the Berlin Wall. Federal Chancellor Merkel is commemorating the Pan-European Picnic of 1989 in Sopron today. It marked the end of repression & the start of our united Europe. Thank you, Hungary ??! #EuropeUnited pic.twitter.com/qzUzdteiw6

The German Foreign Office tweeted about the anniversary of the “Pan-European picnic” on Monday.

The first mass exodus of East Germans since the construction of the Berlin Wall in 1961, it was seen as a key factor in the fall of the wall itself three months later.

The commemoration is a rare encounter between the two of the great survivors of European politics, with Merkel in office since 2005 and Orban since 2010.

Their last major bilateral meeting was in July 2018 when Orban made his first visit to Berlin for three years. Merkel holding a press conference during his bilateral visit to Berlin in July 2018. Photo: DPA

It was an awkward affair during which their divisions were on full display and Merkel accused Orban of failing to respect “humanity” with his harsh  anti-immigration policies.

Orban has been a sharp critic of Merkel's 2015 decision to open German borders to those fleeing Middle Eastern conflict zones.

Merkel said at Monday's press conference that she had faith in incoming European Commission President Ursula Von der Leyen to give fresh impetus to finding a common European approach to the migration question.

Meanwhile, Orban was asked whether it was incongruous to celebrate the dismantling of borders given that Hungary has erected fences along its southern frontier.

Due to the Schengen agreement, “in one sense we are Germany's southern garrison,” he added.

Pressed on the frequent criticisms levelled at Hungary over the erosion of the rule of law, Orban said they were “politically biased and not supported by facts”.

“We have our own… constitutional foundations and Christian freedom which we will always protect,” he said.

'Liberation from the Soviet yoke'

In his address to the service in Sopron, Orban hailed the fact that the events of 30 years ago had “cleared the way towards German reunification”.

Hungarians had always known that “our liberation from the Soviet yoke would be definitive endure only once Germany was united,” he added.

Merkel recalled her own memories of seeing plans for the picnic advertised in 1989.

She remembered the “uncertainty and worry” when it became apparent the picnic had turned into an escape to the West.

“Everyone knew how the uprising in East Germany in 1953 turned out, as well as the one in Hungary in 1956 and the Prague Spring,” she added. She praised the “courage” and “humanity” of the Hungarian border guards who didn't fire on the crowds.

The pair held talks ahead of a joint news conference set for 12:45 pm.

The two leaders were both personally marked by the events of 1989 but have since taken starkly diverging political directions.

Merkel's upbringing in communist East Germany imbued her with a belief in the importance of liberal values in politics and free market economics.

Orban by contrast, while starting as a young liberal centrist in 1989, sees the events of that year as the first step for the nations of eastern Europe to re-establish their sovereignty.

Last week Merkel's spokesman Steffen Seibert admitted that the “differences of opinion” between the two leaders on issues such as refugee policy were well known and that they would tackle current events in their discussions.

Despite the political tensions between the two, Hungary and Germany enjoy close economic relations.

Germany is Hungary's largest trading partner and a major source of foreign investment, particularly in the form of the mighty German car industry.