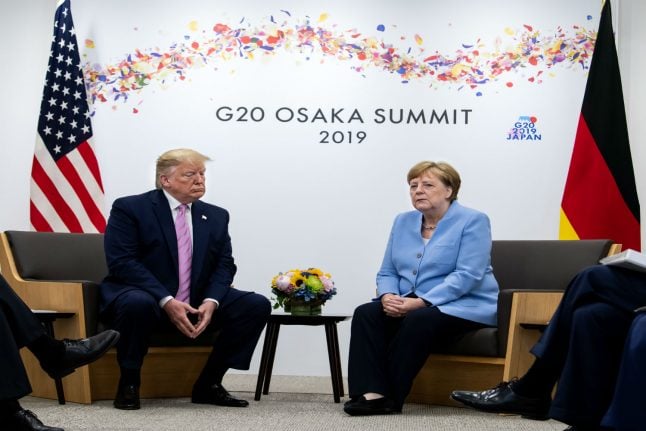 Trump and Merkel meeting outside of Germany at the G20 summit in Osaka, Japan in 2019. Photo: DPA

Next week the American Air Force One plane will embark on its next transatlantic flight – US President Donald Trump’s 15th trip abroad.

First off, he will fly to the G7 summit in Biarritz, France, and just a few days later the President is due to visit Poland and Denmark.

Yet Trump, once again, is avoiding stopping in Germany, traditionally one of the closest allies of the US.

The US president has now been in office for more than two and a half years, and there has been no bilateral visit – or one not linked to a summit meeting – to the Bundesrepublik. Nor is any planned. That says a lot about the relationship between Berlin and Washington.

Until now, Trump only made stops in Hamburg for the G20 summit in July 2017, when he came from his first visit to Poland.

On his way back from Iraq in December, the President also made a brief visit to the US military base in Ramstein in Rhineland-Palatinate to meet with soldiers. Trump visiting the military base in Ramstein in December 2018. Photo: DPA

Bilateral visits to other European countries have already taken place: Besides Poland, the President has already paid visits – twice – to France and Great Britain, the two most powerful European states besides Germany.

He has also visited Italy, and G7 countries – except Germany.

Trump also stopped in Ireland, where his sprawling golf resort might have played a role.

Compared to Trump's predecessors, his absence from Germany is unusual. Less than five months after his inauguration, Barack Obama travelled to Dresden to meet German Chancellor Angela Merkel in June 2009, before the two travelled together to the Buchenwald concentration camp near Weimar.

George W. Bush was in office for just over 16 months when he met Chancellor Gerhard Schröder in Berlin in May 2001 and addressed the Bundestag.

It took Bill Clinton just under 18 months to meet Chancellor Helmut Kohl in Bonn in July 1994, and give a speech at the Brandenburg Gate in Berlin.

However, there would not be many pleasantries to discuss at a meeting with Merkel. No US ally is more at the centre of Trump's criticism than Germany. Trump is a bitter opponent of the Nord Stream 2 Baltic Sea pipeline, which is to bring gas from Russia to Germany.

He accuses Germany of paying Russia billions of euros for gas supplies, and at the same time relying on the protection of the US.

Again and again, the US president had criticized Germany's defence spending, which in his view is too low. The US is also openly threatening to withdraw part of its troops from Germany.

“It is really offensive to expect the US taxpayer to continue paying more than 50,000 Americans in Germany, but the Germans to use their trade surplus for domestic purposes,” US Ambassador Richard Grenell recently told DPA.

Conversely, the German government has sharply rejected the US military mission to protect merchant ships in the Persian Gulf.

It is still unclear to what extent Germany will participate in the US-led alliance against the terrorist organization Islamic State.

Berlin and Washington are also at heads when it comes to climate protection and the nuclear agreement with Iran.

Trump's threat to impose punitive customs duties on car imports from the EU to the US, which would affect Germany in particular, remains in the foreground.

The bottom line is that the list of German-American differences is longer than ever before in the post-war period.

Left on the sidelines

So it's actually no wonder that Trump has left Germany on the sidelines. But that's not all: he is now visiting two countries – Poland and Denmark – that are on his side in central conflicts with Germany.

Increasingly conservative Poland meets NATO's two-percent target, is regarded as Trump's most loyal friend in the EU and is against Nord Stream 2 – just like Denmark.

It is no secret that Merkel and Trump have not become friends. Over and over, Trump has attacked the Chancellor for her refugee policy. At the end of 2015 – just before his election victory in the following year – Trump described Merkel as the person “who is ruining Germany”.

When Merkel travelled to the US at the end of May, Trump had no time for the Chancellor. Merkel gave a highly acclaimed speech to graduates at Harvard Elite University, which was dubbed by many journalists as her first openly “anti-Trump speech” – although Merkel never mentioned his name once.

The official university newspaper “Harvard Gazette” – who had a close relationship with Obama – celebrated its visitor as the as “Chancellor of the Free World”. The term was a suble stab to Trump: The Americans traditionally see their president as the leader of the free world.

Merkel's commencement address at Harvard University in May 2019. Official video from Harvard.

Trump likes to be celebrated, and he is unlikely to receive much applause in Germany.

“Some people have said that it was the best speech a president has ever made in Europe,” Trump said recently in his usual brand of immodesty, following a speech in the Polish capital of Warsaw in June 2017.

In Germany, on the other hand, Trump is more likely to encounter protests. According to a survey published last October by the opinion research institute Pew, only 10 percent of Germans surveyed trusted the US president, while the same figures for Obama stood at 88 percent. In Poland, 35 percent said they trusted Trump.

Beyond politics, however, there is actually another reason for Trump to come to Germany: His ancestors come from Kallstadt, a small wine-growing town in the far western state of Rhineland-Palatinate.

The US ambassador in Berlin, Richard Grenell, announced at the end of last year that Trump was determined to visit the tiny town.

“I don't know when, but he told me that he wanted to come and see his family's hometown,” Grenell said. Since then, however, there has been no talk of it.

The next meeting with Merkel will now take place on “neutral ground”: At the G7 summit in Biarritz.

And in Warsaw, on September 1st, Trump will take part in a World War II commemoration event together with Germany's President Frank-Walter Steinmeier.

This relationship is not unburdened either. Even as Foreign Minister, Steinmeier avoided diplomatic statements about Trump in the 2016 presidential elections, calling him a “preacher of hate”.

But as increasing uncertainty in the world looms, it pays to have friends. Can Germany and the US ever mend their relationship?