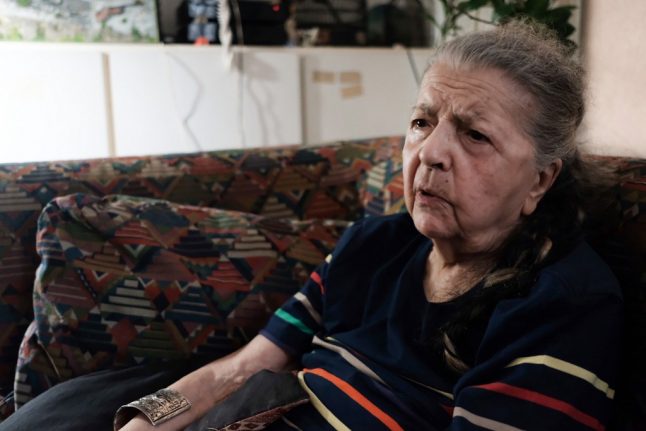 He was taking in the view of Louvre and the Tuileries gardens when Riffaud, then just 19 and a trainee midwife, shooed a little boy away and took out her pistol.

“It happened all very quickly,” she told AFP. “I didn't want to shoot him in the back… I wanted him to see me, so he would have time to get his weapon out.

“He turned and I put two bullets in his head. He dropped like a stone. He didn't suffer.

“It wasn't done with hate, if anything I was pained about having to do it,” she said, her eyes closed as she remembered the moment.

Riffaud, now 94, was one of the most remarkable Resistance leaders who helped liberate the French capital in August, 1944.

But she very nearly did not live long enough to see it. Having ridden away on her bicycle, members of the collaborationist French militia chased her and mowed her down with their car.

Knowing she would probably be sexually abused and tortured before they killed her, she reached out for her gun that had been knocked onto the pavement.

But they got there first. This week in 1944 a series of street battles and mass strikes began as Allied troops advanced on Paris. Photo: AFP

'I expected to be shot'

“I was lucky because they could have killed me right there,” and she was “lucky” again that they handed her over to the Gestapo so their leader could collect a bounty for her rather than to his own militia interrogators – who tended to rape their female prisoners.

“Because it was a Sunday afternoon the Gestapo's torture specialists were off, so I was questioned by some crudely brutal SS members who knocked me out but lacked the finesse of the true experts.

“I told them nothing and I expected to be shot the next morning,” Riffaud said, holding a cigarillo.

Instead she was handed over to the French police. While in detention Riffaud helped a Jewish woman deliver a baby.

It was stillborn. A notorious officer had repeatedly kicked the mother in the stomach to try to get her to betray the child's father.

Having shamed him into allowing the haemorrhaging woman to go to hospital, the officer battered Riffaud and handed her back to the Gestapo, saying they would “poke out my eyes and cut me into little pieces”.

But somehow Riffaud – who had taken on the codename “Rainer” after the Austrian poet Rainer Maria Rilke – survived, narrowly avoiding the firing  squad before briefly escaping as she was being deported to a concentration camp.

She was then released in a prisoner swap on August 19, a week before Paris was liberated. A day or two later Riffaud was back in action commanding a group of fighters in the working class northeast of Paris as a popular revolt against  the Nazis broke out across the city.

She was already regarded as a hardened veteran of the Resistance, even though she had only joined the armed struggle the previous winter.

Back then the raids and bombings she and her comrades undertook were often little more than suicide missions.

Now people were flocking to join the Resistance “who had done nothing during the war.

“They were pouring onto the streets and learned very quickly how to handle a rifle.

“It was joyous,” Riffaud recalled. “People were falling in love and kissing each other without knowing each other. After years of having to do everything in secret, we could fight in the open.”

Her biggest exploit was capturing a German arms and supply train and taking the 80 soldiers on board prisoner with just three men and an heroic French train driver.

After a fierce battle where they chucked all the grenades and explosives they had at the train, Riffaud used fireworks to hoodwink the Germans into  thinking they were hugely outnumbered and outgunned.

“We made an incredible amount of noise and it terrified the poor Germans and they pulled back into a tunnel. The locomotive was still sticking out and we managed to persuade a retired train driver who was washing the dishes with his wife to go down with us to detach it.

“He was a brave man. We warned him that he would be a perfect target, but he told us not to worry, and crawled underneath the engine, unhooked it and drove it away, and then walked home. We didn't even think to thank him.”

By then Riffaud's happy few had been reinforced by local firemen and even the mayor.

“It was all quite festive,” she admitted.

Cut off inside the tunnel, the cowed Germans eventually gave themselves up.

It was only then that Riffaud realised it was her 20th birthday and they partied with the ham, jam and dried sausages they found on the train.

Two days later, while the rest of Paris celebrated the liberation, she was battling the last battalion of fanatical SS soldiers holed up in the city.

Her men carried the last Resistance fighter to die in Paris, her old comrade violinist Michel Tagrine, to her, but she could do nothing for him. French generals prepare to march down the Champs-Elysées after the liberation of the city. Photo: AFP

Riffaud later tried to join the French army but was not allowed because of her sex and age. “You had to be 21,” she said.

In the months that followed, she battled depression but luckily the young communist fell in with writers and artists like Paul Eluard, Louis Aragon and Picasso, who drew her portrait.

“They stopped me from doing myself in, because a lot of Resistance fighters killed themselves after the war.”

Riffaud returned to the frontline after the war as a radically engaged journalist, meeting the Vietnamese leader Ho Chi Minh, covering the Algerian War of Independence and living with the Viet Cong guerrillas fighting the Americans in South Vietnam before returning to France.

There she took up the cause of low-paid workers by becoming one herself, writing a bestselling expose of the drudgery of care assistants in Parisian hospitals.