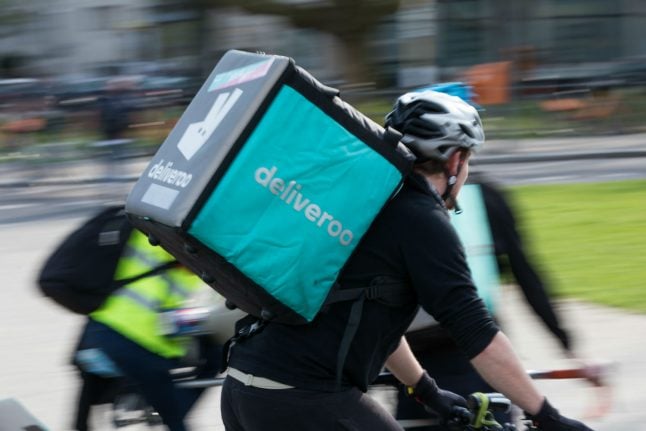 A Deliveroo rider in Berlin in April 2018. Photo: DPA

In an email, the company told customers that “from August 16 we will no longer be delivering in Germany… Deliveroo's focus will now be on growing our operations in other markets around the world.”

A Deliveroo spokesman told AFP that it plans to refocus its energy and cash elsewhere in Europe and Asia.

But it added that it could return to Germany in future.

Deliveroo allows users to order food online, placing their order at the kitchen and summoning a bicycle-mounted worker to deliver it from the restaurant to their door.

Since starting operations in Germany in April 2015, it has amassed 1,100 freelance riders and around 100 staff and temporary employees.

However, the company has received several complaints from its riders who have said they are compensated lower than the German minimum wage, and do not receive necessary reimbursements for their work, such as bike repairs.

The company's departure leaves little challenge to the dominance of competing service Lieferando, formerly known as Lieferheld and owned by Dutch firm Takeaway.

Deliveroo added that it will pay restaurant owners, riders and its own employees in Germany compensation packages, while customers will be paid back outstanding credit on their accounts.

The pullout from Germany comes as a surprise after Deliveroo announced big expansion plans earlier this year, having secured some $575 million in new funding from investors including Amazon in May.

It had previously withdrawn from a string of smaller German towns to focus on the biggest cities like Berlin, Hamburg and Frankfurt.

Elsewhere in Europe, Deliveroo last week faced protest and a call for a one-day boycott from French delivery riders, who said a new pay scale would mean lower wages for their work.

SEE ALSO: Hard and fast: the reality of life as a Berlin food courier