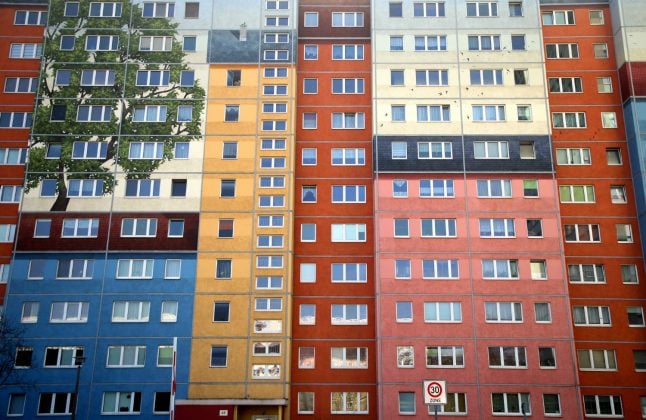 Apartments in the east of Berlin. Photo: DPA

When Christopher von Gumppenberg moved to Berlin in 2018, friends were amazed that he paid over €4,000 per sq m to buy an apartment. A year later, prices in the same building have jumped to €6,000 per sq metre and his friends are still looking.

“I am lucky to have found a place at all,” says von Gumppenberg, the CEO of Kugu, a digital toolbox for managing buildings and related business processes.

The changes in the housing market are an evergreen topic, but the pressure on renters and new buyers in Berlin today is immense. The capital was rated as one of the fastest growing housing markets in the world last year.

READ ALSO: Germany to invest in new homes as rent in cities soars by six percent

Rapidly growing – in residents and prices

Berlin is expected to swell to four million inhabitants by 2035, and more Berliners are choosing to live alone (54% according to the Department for Urban Development and Housing).

To satisfy demand, it is estimated by Frank Knight that 20,000 new residential units need to be delivered year on year – in 2017, only around 15,699 were ready.

So as rents climb and the lack of affordable housing bites, are we looking at a housing crisis – or is a bubble forming over Berlin?

The market in the capital is unique, explains von Gumppernberg.

“It only started to develop here since the beginning of the 2000s,” he says. This late development is the result of local factors: the city’s turbulent history, its dispersed social centres, its lack of major corporate headquarters or even a large international airport. Flats being built in the west of Berlin. Photo: DPA

This means Berlin has far more opportunities for investment than mature markets like London or Paris.

Hope the horizon for buyers?

For those interested in buying there could be good news – or at least it appears so at first sight.

Interest rates have fallen to historic lows. Last year, the average mortgage rate was 1.85%, according to data from Statista. This encourages lending, though deposits (which are linked to the value of a property) remain a hurdle to first-time buyers.

When interest rates rise again, the impact will be felt. “The market will uncover who calculated correctly,” von Gummpenberg predicts. “I think there will not be a burst, but at least a slow down. Especially in certain B and C locations.”

In Berlin, the market is also far more diverse than in other cities. “You get everything in Berlin,” says Christian Crain, head of PriceHubble, a digital service that gives property valuations and predictions.. “The range of price and quality is huge. It’s like the entire German market but squeezed into 900 km².”

This means it is also highly fragmented and attractive to investors. “The level is too high for locals but for foreign buyers, prices are still very low,” says Crain. “Realtors and asset managers now focus only on foreigners in some segments, because they can no longer sell to existing inhabitants.” While hardly ideal for locals, the boom is forecast to continue.

“I would say, continual long-term growth, easily 3% year-on-year. Of course, there will be peaks and spikes.”

READ ALSO: How new homes are not being built where they are needed in Germany

Home ownership in Berlin is only 15%, and the lack of affordable housing has fuelled calls for the state to help take back control of the market for residents. High-profile moves by the Berlin Senate have attracted a mixed response though.

The five-year rent freeze and the purchase of 670 flats from Deutsche Wohnen have been criticized for endangering investment in the city. Crain dismisses the measures as “fighting the symptoms rather than the underlying cause of the problem”.

READ ALSO: Why Berlin is buying back nearly 700 apartments on its historic Karl-Marx-Allee

Von Gummpenberg blames the current shortage on a lack of long-term planning. “The German government failed to set and implement the right measures for social housing in the past 20 years,” he says. Following reunification, the city sold off thousands of state-owned housing units and now has a stock of only 100,000.

“By privatizing many social housing companies and buildings, Germany freed them into the capital market with its own rules.”

He compares this to Austria’s extremely effective system. “There, creating affordable living space has been a core strategy for 150 years.” In Vienna, 62% of the city’s 1,8 million inhabitants currently live in social housing and pay subsidized rents.

In Germany, schemes like housing co-operatives (Genossenschaftsmodelle) have been successful on a limited scale he says but the government needs to make more opportunities available. An advert posted from someone looking for a flat in Berlin. Photo: DPA

Also bullish and overheating is Berlin's commercial market. Companies, both small and large, face difficult conditions when looking to rent office space, explains Julian Jost. He is CEO and co-founder of Spacebase, a global platform for booking meeting and work spaces, also based in Berlin.

“If companies want to rent nowadays, they need to pay €30 or more per sq m and sign up for at least five years. That’s a significant commitment. Not everyone can put down a deposit like that and so young companies find it impossible to get an efficient lease.”

Instead they are being forced into co-working spaces. “This places a real strain on cash flow, with much higher per person costs.”

New platforms are changing this, however. He predicts the ongoing digitalization of the real estate industry, both residential and commercial, will bring greater flexibility. “It allows for better, more efficient matchmaking between tenants and landlords. New technology like ours makes it much easier for everyone.”

PropTech has already gained momentum and could bring disruption to a rigid industry, until now controlled by realtors and estate agents. It could also help out a squeezed market, and Berlin could be well-situated to take advantage of these trends.

“In Berlin, you have a vital culture of innovation,” Jost adds. “That is why so many of us are attracted here and I think this can also help the city find solutions.”