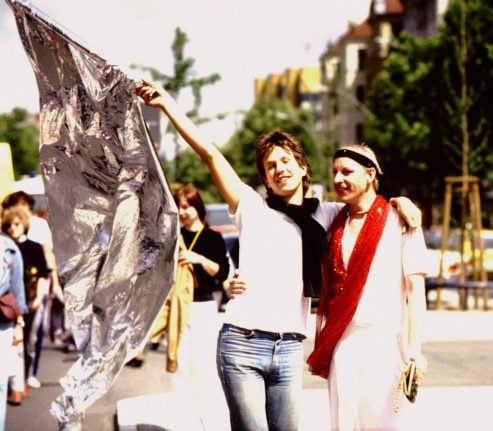 The Local first published this interview in July 2018.

Bernd Gaiser has dedicated his life to fighting for the rights of the LGBT community.

From organizing Germany’s first CSD march, which took place in Berlin in 1979, to co-creating the Lebensort Viefalt, a multi-generational housing project aimed at LGBT people with care and counselling available, Gaiser has been at the forefront of the movement.

But it was a tragic death in the 1960s that led Heidelberg-born Gaiser to follow this path.

Gaiser, now 73, entered military service with the marines when he was 20.

While there, one of his comrades was dishonourably discharged because he was found to have had sexual contact with another man.

This was a violation of Paragraph 175, one of Germany’s most controversial laws, which made homosexual acts between men a crime. During World War II, it was used by the Nazis to persecute people, leading to the deaths of thousands in concentration camps.

In 1969, the government eased the law by providing for an age of consent of 21. There were further changes to make it more lenient, and it was finally abolished in 1994. East Germany had already reformed its more lenient version of the Paragraph in 1968, and repealed it in 1988.

READ ALSO: From persecution to pride: The history of LGBTQ+ rights in Germany

Gaiser’s military friend went to court but before the sentencing, he shot himself with his father’s gun.

“I’m still sad about it,” Gaiser tells The Local when we meet in the Schwules Museum (Gay Museum) in Berlin, which opened in 1985 and is the first of its kind in the world.

“He was a very lively, happy person. He was just about to become a ballet dancer and had already signed a contract with the theatre in Heidelberg so he could join their company. The social stigma was so strong at the time that he didn’t see any other way out except to kill himself.”

The man’s mother took her son’s address book and invited every name she found to the funeral.

“That was the first time I ended up in a group with a lot of homosexual men and that’s when we thought we should form a community and do something so that this doesn’t happen again,” says Gaiser.

Although he recalls many details about the man who killed himself, Gaiser cannot remember his name.

However, his legacy lives on because of the impact he had on so many people's’ lives.

Like others, Gaiser found it difficult growing up in Germany as someone who identified as being in a sexual minority. He came out to friends and family between the ages of 16 and 19.

“When my family found out I was having a relationship with another guy who also came out, the parents forbid us to see each other because they felt it would bring shame to the family,” he says.

Following the suicide of his friend and the subsequent pact he made to try and stop this from happening again, Gaiser travelled to Berlin and joined the gay rights movement.

Berlin has a long history of gay culture and it was known as the Gay Capital of Europe in the 1920s.

Writers including Christopher Isherwood, who was gay, drew inspiration from the city and its thriving cabaret scene around this time. He had gone to Germany to meet his friend, the poet WH Auden.

However, the rise of fascism in Germany in the 1930s put pressure on the queer community and forced the movement underground.

The decriminalization of homosexuality in 1969 allowed for a more open expression of gay and lesbian culture.

Bernd Gaiser at the Schwules Museum in Berlin next to pictures taken at the first CSD in 1979. Picture: Rachel Loxton

In Berlin, Gaiser, who worked as bookseller, became involved with groups such as the Homosexuelle Aktion West Berlin (HAW),  which protested against lingering anti-LGBT laws.

A demonstration was held in 1973 in Berlin, of which there are pictures of in the Schwules Museum.

“Lots of drag queens came from Paris to join the parade,” says Gaiser.

“There were different political perspectives: the flamboyant gays and the gays who thought it was more important to blend in to society.”

Despite the demonstration being shown on high profile German news programme the Tagesshau – a great success for the cause – the differences in opinions in how LGBT people should behave and be perceived led to splits in the movement.

The beginning of CSD in Germany

It wasn’t until six years later in 1979, when Gaiser, then 33-years-old, was drinking a beer in the well-known gay bar SchwuZ that thoughts of another public demo began to form.

Gaiser’s friend Andreas Pareik had just come back from New York where he had attended the Gay Pride march.

“Andreas said: ‘Listen, it’s the 10th anniversary of Stonewall, we need to do something like this in Berlin’” says Gaiser.

Gaiser was on board immediately. They submitted a letter to the Berlin authorities asking for permission to hold the march.

The friends registered the march privately in their own names instead of aligning to any of the gay and lesbian groups, in the hope it would bring people together in a neutral environment.

“We felt very insecure because we distributed fliers everywhere but we didn’t get any feedback. We didn’t know what to expect,” says Gaiser.

The demonstration on June 30th, a Saturday in 1979, exceeded their expectations.

The organizers also felt happy because they managed to pull the different groups “who were battling with each other” in one place.

The message was: be visible.

Wearing a white petticoat and a scarf he had borrowed from a friend, Gaiser is smiling as he points out the photos of himself on the Schwules Museum wall.

“I didn’t want to look particularly pretty but I wanted to draw attention,” he says.

“We organized a car. We drew posters a few days before it that said things like: ‘Lesbians come here and come with us!’ and ‘Make your gayness visible!’”

Gaiser says a group of lesbians held a sign that said: ‘Lesbians rise and the world will experience you!’”

“It was very important that lesbian women joined the parade, it wasn’t separate,” adds Gaiser.

Their political demand was for Paragraph 175 to be completely scrapped.

The parade started at Savigny Platz in West Berlin and continued onto Kurfürstendamm, Kantstraße and ended at Hallensee, where a picnic was planned.

This area, which includes Schöneberg, has traditionally been a gay-friendly area and the scene continues to flourish today with a host of LGBT bars, leather shops and rainbow flags being flown.

Unfortunately, and similarly to the 2017 CSD, it rained.

“It began to pour down and everybody escaped,” he says.

Although the demonstration received some coverage in local papers, it wasn’t covered by the national news.

But it was a joyous occasion.

“We were very happy,” says Gaiser. “Nobody at the time thought they had started something that would lead to a 40-year celebration or to this big party that we have now. It was a very small event then.”

Gaiser helped organize CSD until the 1990s when a board was established.

Today he is still involved. Five years ago he founded an initiative with other groups to invite older LGBT people to pride. There are rickshaws for the people who are not able to walk along the whole route.

“This is so older people are not excluded, to bridge the age gap.”

Gaiser says pride should always be political, adding that one of the demands in 2018 was “that the queer community should be included more in gay pride: bisexuals, transgender people, lesbians”. The whole community,” he adds.

In recent years, however, critics have said CSD has become too commercial.

“They are right,” says Gaiser. “But that’s why the organizations decided that the commercial trucks have to go to the back of the parade and there has to be a space behind the CSD trucks.”

After the Berlin Wall fell and because of the AIDS crisis in the 1980s, Gaiser says the popularity of CSD “exploded” as many LGBTQ+ people began thinking more politically.

Nowadays around half-a-million people of all sexualities, as well as from different cultures and backgrounds, join the demonstration which ends with a party at Brandenburg Gate. In 2017 same-sex marriage became legal in Germany, a major landmark for campaigners.

“In 1973 people standing at the side of the march said they were sorry homosexuals hadn’t been gassed by the Nazis.

“That doesn’t happen now in Germany, but the fight continues.”

Gaiser says pride demonstrates for the rights of LGBTQ+ people across the world, as well as against other societal prejudices such as racism, sexism and ableism.

Dr Kevin Clarke, head of the press office at the Schwules Museum, adds: “Silence is a very strong form of homophobia.

“The aim of the museum is to create visibility, it’s the same idea as what Bernd said about the demonstrations asking people to make themselves visible.”

Clarke says although the situation has improved enormously, Germany still has some way to go.

“Homosexuals have got so much more visibility through the TV, through the news, and today many people know someone in their family who is gay,” he says.

“But when you compare Germany to the UK for example, who had the Queer Britannia series by the BBC (state-funded broadcaster), that actually hasn’t happened here.

“Why isn’t Germany, which used to be the leader in gay rights, doing something like that?”

A normal guy who's led an extraordinary life

Gasier continues to talk about pride publicly because he still feels it’s important to be visible and tell his story.

He is also aware that some of the people involved in the movement are no longer here. His friend Andreas, fellow CSD Berlin founder, sadly died in a car crash in 1982.

In 2017 Gaiser received the Stonewall prize from the Berlin CSD for his lifetime commitment to the cause.

Despite the praise Gaiser is modest and wants to point out that he is not special.

“I don’t feel like a legend, I’m just a normal guy and I like it that way,” he says.

The CSD will take place in Berlin on Saturday.