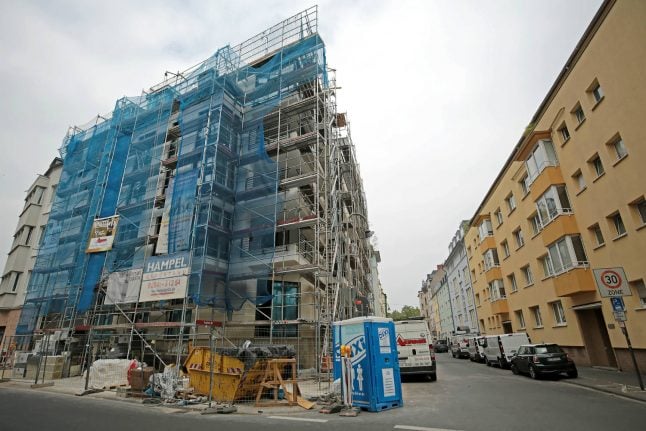 That’s according to a new study by the Institute of the German Economy (IW) which says too few apartments are being built where they are needed, such as metropolitan areas and university towns.

The IW found that in Cologne, less than half – 46 percent – of the demand for new apartments has been met since 2016.

Although the government has pledged to tackle Germany's affordable housing shortage with a series of measures, including the construction of new social housing units, the outlook is still currently bleak.

Only 287,000 apartments were completed in 2018. This figure is unlikely to pick up significantly this year, so the discrepancy between supply and demand remains large.

READ ALSO: Germany to invest in new homes as rent in cities soars by six percent

Why are too few homes being built?

Researchers calculated the figures by comparing the number of apartments completed in the past three years with the demand they estimated on the basis of factors such as population development and vacancies.

In other major cities the outlook is also poor. In Stuttgart for example just 56 percent of the apartments needed have been built since 2016.

The situation is only slightly better in Munich, where the figure is 67 percent. In Berlin 73 percent of the demand has been met and in Frankfurt am Main that figure is 78 percent.

“Not only are there currently no apartments here, but there is also a need for a further increase in construction activity in the longer term,” they wrote in the study

It’s a similar picture in university towns like Münster, where too few apartments are being built.

Researchers said there are various reasons for the lack of new homes, including the high influx of people coming into cities to live, a lack of skilled workers in the construction industry and strict building regulations.

READ ALSO: Why Berlin is buying back nearly 700 apartments on its historic Karl-Marx-Allee The authors warn that cities will have to make a proactive effort in order to slow down the increase of rents as demand for apartments increases.

They argue that, among other measures, the government and the state should provide more funding to cities for improving local transport connections. That way, suburbs would be better connected and it could relieve the pressure on the housing market in inner cities.

However, the situation in rural areas is quite different: according to research there are too many new buildings being built in some places, such as Saxony-Anhalt, Saxony, Saarland and the outskirts of Bavaria.

The researchers found that – relatively – “many” new homes were being built which is positive, however in some places it would make more sense to convert old buildings instead of constructing new buildings.

Meanwhile, new developments on the doorsteps of small towns and cities are making village centres less desirable, and the vacancy problem is worsening.

“Municipalities in rural areas far away from metropolises should better manage the space in order to remain attractive and avoid vacancies in the centre of the town,” the study said.

The principle of “conversion before new construction” is important here, the researchers said. In one third of German districts, “construction activity in new buildings should be slowed down in order to avoid oversupply”.

The main reason for this is the expected decline in immigration, which is unlikely to remain permanently at a level of more than 400,000 people per year.